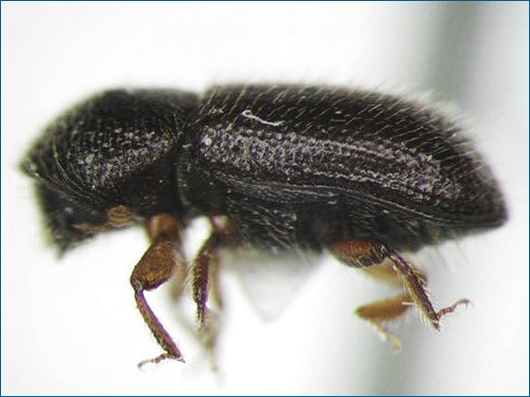 Rare Beetle Found in Massachusetts Forest
BOSTON - A species of beetle never before seen in North America has been discovered in a Massachusetts forest, but the Asian insect does not appear to pose an ecological threat, experts said Monday. Twenty-two beetles belonging to the Xyleborus seriatus species of ambrosia beetle were found in April in traps set by state forestry workers in Southborough, about 25 miles west of Boston. Two or three more were trapped in nearby Stow. The insects were sent to Cornell University to be studied. They may have "hitchhiked" to the United States on wooden crates shipped from Asia, Cornell entomologist Richard Hoebeke said. "My guess is that it has been around awhile and simply gone undetected because nobody was looking for it," said Hoebeke, who announced the finding in an e-mail to colleagues on July 20. Each year, a dozen species of insects on average are discovered for the first time in the U.S., he said. Some insects, such as the hemlock wooly adelgid, emerald ash borer and Asian longhorn beetle, can wreak havoc on wildlife habitat. However, most ambrosia beetles feed on fungi in dead or dying trees, not healthy ones. "So far, it's not a cause for concern," said Glenn Rosenholm, regional spokesman for the U.S. Forest Service. The new beetle is about two millimeters long and has brown legs and wings. Scientists are thinking about naming it the "Southborough beetle."

Ambrosia Beetle
Ambrosia beetles are wood-boring beetles in the genus Platypus. They attack weakened or recently cut trees, feeding on a fungus which they bring to the tree. They attack both pine species and hardwoods, but do not attack either healthy trees or seasoned lumber. The beetle derives its name from its curious cultivation of a succulent fungus, called ambrosia. Ambrosia beetles bore deep though minute galleries into trees and timber, and the wood-dust provides a bed for the growth of the fungus, on which the insects and larvae feed. Scientific classification :: Kingdom: Animalia; Phylum: Arthropoda; Class: Insecta; Order: Coleoptera; Family: Platypodidae; Genus: Platypus.

Fact Sheet on Ambrosia Beetles
It's not enough that our trees are under attack by pine beetles. It's also that time of year when the Asian Ambrosia Beetle (Xylosandrus crassiusculus (Mot.), Coleoptera, Scolytidae) may be attacking your trees. Usually the "toothpicks" are the first sign of the attack. The "toothpicks" are the frass (sawdust) created by the adult female beetle boring into the tree. A wide variety of trees and shrubs, including pecan, peach, plum, cherry, persimmon, oak, elm, sweet gum, magnolia, fig, buckeye and possibly others, may be attacked by the beetle. The female bores into branches and trunks of the plants in order to lay eggs. Once the beetle is in the hole the "ambrosia fungus" is seeded into the plant. The fungus grows rapidly in the moist environment. The female and the new larvae feed on the developing fungus. They do not feed on the wood.

Five Mile House
When burnt-out homicide policewoman Leslie Stone shoots a suspected child murderer, she is put on leave of absence. Her building contractor husband gets a job in a small New England town, restoring the house of Eleanor Bly, who, legend says, killed all her children and then jumped to her own death. Unknown to all, Eleanor's ghost haunts this house, and Eleanor's first-person narration of her own tale alternates with Leslie's story. For modern-day atmosphere, the town has a Wiccan coven. Leslie befriends Gwen, an ex-member of the coven. After a miscarriage, Gwen kills herself, but Leslie does not believe it is suicide. The ghost narration is a nice hook, and might carry the book if it weren't overshadowed by problems large and small. For example, a character misquotes Macbeth; the correct line is "Double, double, toil and trouble", not "Bubble, bubble, toil and trouble" as it appears in Novak's book. This line is quoted often enough, and Shakespeare is easy enough to check, that Novak and her editor have no excuse for the gaffe. Another annoying problem is the name of the lost, mystical book whose existence Gwen was attempting to disprove before she died: the Analecta Seriatus; the second word should be "Seriatim". (You can find it in the Oxford English Dictionary.) Although people in small New England towns have been both famous and much maligned over the years for their reserved manner, they generally are more reserved than the people in this book; Wellington feels more like a Midwestern town than one in the Northeast. Mixed up with the Wiccan coven are stories of the aforementioned Analecta Seriatus, which supposedly begins with a lethal recipe for cement, and continues with a calculation of the number pi all the way to the last digit. Never mind that pi is endless; the New England Wiccans I've known are far more interested in books about herbal remedies, and they forbid sacrifices, whether human or animal, in the strongest terms. The focus on this mystical book, which may or may not exist, ruins the climax of the mystery. Although I won't speak to the interests of individual Wiccans, a Wiccan group fixation on an ancient cement mixture and the calculation of pi is so out of character that by the time your heart is supposed to be thumping, your mouth is yawning instead. Although the ghost narrative is truly intriguing, it cannot save Five Mile House. A reviewer never enjoys panning the toil of a first-time novelist—so here's hoping that this new author works to make her second mystery trouble-free. Novak should set her next book in a more familiar place, study up on her ancient languages and Shakespeare, and stay away from the sensationalized, Hollywood version of goddess worship.

ambrosia :: 1. Greek & Roman Mythology The food of the gods, thought to confer immortality. 2. Something with an especially delicious flavor or fragrance. 3. A dessert containing primarily oranges and flaked coconut. ETYMOLOGY: Latin, from Greek ambrosia, from ambrotos, immortal, immortalizing. See mer- in Appendix I.

amaranth :: 1. Any of various annuals of the genus Amaranthus having dense green or reddish clusters of tiny flowers and including several weeds, ornamentals, and food plants. Also called pigweed. 2. An imaginary flower that never fades. 3. A deep reddish purple to dark or grayish, purplish red. 4. A dark red to purple azo dye. ETYMOLOGY: New Latin Amaranthus, genus name, alteration of Latin amarantus, from Greek amarantos, unfading : a-, not; see a–1 + marainein, to wither; see mer- in Appendix I.

series :: 1. A number of objects or events arranged or coming one after the other in succession. 2. A set of stamps, coins or currency issued in a particular period. 3. Physics & Chemistry A group of objects related by linearly varying successive differences in form or configuration: a radioactive decay series; the paraffin alkane series. 4. Mathematics The sum of a sequentially ordered finite or infinite set of terms. 5. Geology A group of rock formations closely related in time of origin and distinct as a group from other formations. 6. Grammar A succession of coordinate elements in a sentence. 7a. A succession of usually continuously numbered issues or volumes of a publication, published with related authors or subjects and similar formats. b. A succession of regularly aired television programs, each one of which is complete in and of itself. 8a. Sports A number of games played by the same two teams, often in succession. b. Baseball The World Series. 9. Linguistics A set of vowels or diphthongs related by ablaut, as in sing, sang, sung, and song. ETYMOLOGY: Latin series, from serere, to join. See ser-2 in Appendix I.

Word of the Day for Thursday February 21, 2002 :: seriatim In a series; one after another (or, point by point). Seriatim derives from the Latin series, meaning "row, chain," and is formed on the same model as verbatim ("word for word") and literatim ("letter for letter"). (see: Word of the Day for Monday January 24, 2005)

seriatim :: (sear-ee-ah-tim) prep. Latin for "one after another" as in a series. Thus, issues or facts are discussed seriatim (or "ad seriatim"), meaning one by one in order.

Bark and ambrosia beetles (Coleoptera: Scolytidae and Platypodidae) constitute a diverse group of beetles that bore in a variety of woody tissues and are well represented in most temperate and tropical forests. Best known are species of Dendroctonus, Ips, and Scolytus that are primary pests of conifers in high-latitude forests, although most of these are atypical of the group as a whole. All species breed in live, stressed, or newly-killed host material. Adults excavate a system of galleries within which eggs are laid and immature development occurs. The greater part of the life cycle takes place within host tissues, except for dispersal between hosts. A fascinating range of patterns of host plant utilization (tissues consumed, relationships with fungal symbionts, and host specificity) and mating behaviors exists within this basic life history paradigm. Most species leave a persistent physical record of their life history and activities in the woody tissues of their hosts that can be interpreted by a student of the group. As a consequence, one can easily tabulate several important biological parameters for a large proportion of the species in an area, including those that have not been studied in detail. (Florida Entomologist)

The Asian ambrosia beetle (AAB), Xylosandrus crassiusculus Motschulsky (Coleoptera: Scolytidae), has become a serious pest of ornamental plants in the southeastern U.S. Other ambrosia beetles also commonly attack nursery stock including the black stem or tea root borer (Xylosandrus germanus Blandford) and the lesser shothole borer (Xyleborinus saxeseni Ratzeburg). Ambrosia beetles damage woody plants when the female beetle initiates a gallery system in the trunk and inoculates the gallery with a symbiotic fungi (ambrosia). The ambrosia beetle adults and larvae then feed on the ambrosia fungus. The combination of tunneling in the xylem and the introduction of pathogens can result in rapid tree mortality. Emergence time of overwintering ambrosia beetles can vary greatly with region and weather conditions. Therefore, monitoring ambrosia beetle flight activity with ethanol-baited traps is the best method to direct scouting efforts and time insecticide applications. The optimum ambrosia beetle trap should be effective, easy to use, and low cost.