991 = From the ashes of the Tarot who shall make the phoenix-wand?
991 = Yet THAT which is not neither is nor is not That which is! 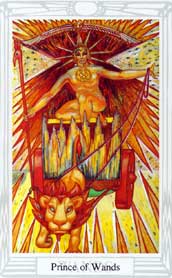 The Prince of Wands represents the airy part of Fire, with its faculty of expanding and volatilising. He rules from the 21st degree of Cancer to the 20th degree of Leo. He is a warrior in complete armour of scale mail, but his arms are bare on account of his vigour and activity. He wears a rayed crown surmounted by a lion's head winged, and from this crown depends a curtain of flame. On his breast is the sigil of To Mega Therion. In his left hand he bears the Phoenix wand of the Second Adept in the Ritual of 5°=6° of R.R. at A.C.), the wand of Power and Energy, while with his other arm he reins the lion which draws his chariot, the chariot which is fortified by a wheel radiating flame. He rides upon a sea of flames, both waved and salient.

The moral qualities appropriate to this figure are swiftness and strength. But he is sometimes inclined to act on impulse; sometimes easily led by external influences; sometimes, especially in trifles, a prey to indecision. He is often violent, especially in the expression of an opinion, but he does not necessarily hold the opinion about which he is so emphatic. He states a vigorous proposition for the sake of stating it. He is in fact very slow to make up his mind thoroughly on any subject, but always sees both sides of every question. He is essentially just, but always feels that justice is not to be attained in the intellectual world. His character is intensely noble and generous. He may be an extravagant boaster, while slyly laughing both at the object of his boast and at himself for making it. He is romantic, especially in matters of history and tradition, to the point of folly, and may engineer "stunts" or play elaborate practical jokes. He might select some inoffensive nobody, and pursue him for years with every weapon of ridicule) as Swift tormented the unhappy Partridge, all without the least animus, ready to give the shirt off his back, should his victim be in need. His sense of humour is omnivorous, and may make him a mysterious figure, dreaded without reason by people who actually know nothing about him but his name-as a symbol of Terror. This is due to the influence of the last decan of Cancer upon this card. One of his greatest faults is pride; meanness and pettiness of any kind he holds in infinite scorn. His courage is fanatically strong, and his endurance indefatigable. He is always fighting against odds, and always wins in the long-the very long-run. This is principally due to his enormous capacity for work, which he exercises for its own sake, "without lust of result"; perhaps his haughty contempt for the world at large-which however coexists with profound and ecstatic respect for "every man and every woman" as "a star"-is responsible for this.

When this card is badly dignified, the character degenerates. Each of the qualities mentioned above is found in its antithesis. There is great cruelty in him, partly sadistic and partly due to callousness arising from indifference-and, in a sense, laziness! So too he may be intolerant, prejudiced and idle-principally because it saves trouble. He may furthermore be an empty boaster and a great coward.

In the YI King, the airy part of Fire is represented by the 42nd Hexagram, Yi, which signifies addition, increase. Full of virtue, and confident therein, he contemplates work of stupendous scope, often with the idea expressed in line 5: "with sincere heart seeking to benefit all below". In this he may achieve immense success. But this course is fraught with commensurate danger. "We see one to whose in crease none will contribute, while many will seek to assail him. He observes no regular rule in the ordering of his heart". (line 6) This peril avoided, there come "parties adding to the store of its subject ten pairs of tortoise shells whose oracles cannot be opposed-Let the King employ them in presenting his offerings to God...." (line 2).