Joachim Clarence Benzing of the BEP 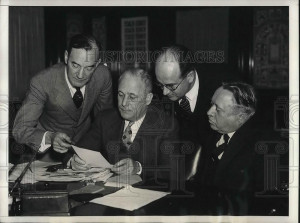 Scene at the U.S. Bureau of Engraving and Printing January 29th, as officials look over new design for the special run of baby bonus bonds which the government hopes to issue to the Veterans about June 15th. Left to Right: J.C. Benzing, Supt. of Engraving Division; Alvin W. Hall, Director; C.R. Long, Assistant Director and Alvin R. Meissner, Head Designer of the Engraving Div. Bureaus—Wash'n. Credit Line (ACME). Date 1-29-36
When one studies the engraving of the money of the Roman epoch, he cannot but be astonished at the remarkable skill which the artists of those times had acquired in the use of a tool so rigid as the burin, and must admit that a skill so remarkable could not have been acquired without long and careful practice, and under the inspiration of works and traditions of which it would be difficult to fix precisely the period, the importance or the duration. —Ancient Methods of Striking Coins, American Journal of Numismatics, Vol. XXVII, July 1892, No. 1
Tags: 100 dollar bill, bep, bureau of engraving and printing, great seal, independence hall, joachim benzing
Subscribe