U.S. Troops to Leave Afghanistan by End of 2016 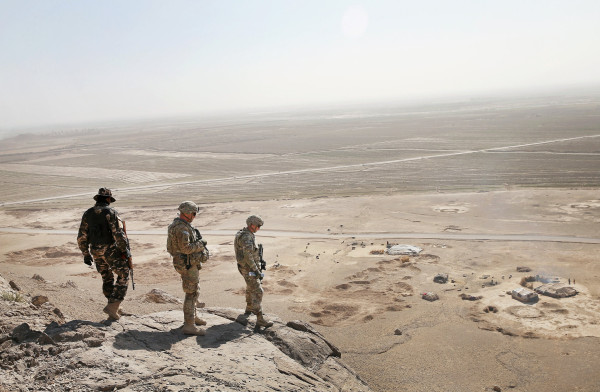 WASHINGTON — President Obama, declaring that it was “time to turn the page on a decade in which so much of our foreign policy was focused on the wars in Afghanistan and Iraq,” announced on Tuesday that he planned to withdraw the last American troops from Afghanistan by the end of 2016.

Under a new timetable outlined by Mr. Obama in the Rose Garden, the 32,000 American troops now in Afghanistan would be reduced to 9,800 after this year.

That number would be cut in half by the end of 2015, and by the end of 2016, there would be only a vestigial force to protect the embassy in Kabul and to help the Afghans with military purchases and other security matters. At the height of American involvement, in 2011, the United States had 101,000 troops in the country.

Mr. Obama said the withdrawal of combat troops from Afghanistan would free up resources to confront an emerging terrorist threat stretching from the Middle East to Africa — a strategy he plans to detail in a commencement address on Wednesday at the United States Military Academy in West Point, N.Y.

“Americans have learned that it’s harder to end wars than it is to begin them,” he said. “Yet this is how wars end in the 21st century.”

The White House
Office of the Press Secretary
For Immediate Release
May 27, 2014

Statement by the President on Afghanistan

THE PRESIDENT: Good afternoon, everybody. As you know, this weekend, I traveled to Afghanistan to thank our men and women in uniform and our deployed civilians, on behalf of a grateful nation, for the extraordinary sacrifices they make on behalf of our security. I was also able to meet with our commanding General and Ambassador to review the progress that we’ve made. And today, I’d like to update the American people on the way forward in Afghanistan and how, this year, we will bring America’s longest war to a responsible end.

The United States did not seek this fight. We went into Afghanistan out of necessity, after our nation was attacked by al Qaeda on September 11th, 2001. We went to war against al Qaeda and its extremist allies with the strong support of the American people and their representatives in Congress; with the international community and our NATO allies; and with the Afghan people, who welcomed the opportunity of a life free from the dark tyranny of extremism.

We have now been in Afghanistan longer than many Americans expected. But make no mistake -- thanks to the skill and sacrifice of our troops, diplomats, and intelligence professionals, we have struck significant blows against al Qaeda’s leadership, we have eliminated Osama bin Laden, and we have prevented Afghanistan from being used to launch attacks against our homeland. We have also supported the Afghan people as they continue the hard work of building a democracy. We’ve extended more opportunities to their people, including women and girls. And we’ve helped train and equip their own security forces.

Now we’re finishing the job we started. Over the last several years, we’ve worked to transition security responsibilities to the Afghans. One year ago, Afghan forces assumed the lead for combat operations. Since then, they’ve continued to grow in size and in strength, while making huge sacrifices for their country. This transition has allowed us to steadily draw down our own forces -- from a peak of 100,000 U.S. troops, to roughly 32,000 today.

2014, therefore, is a pivotal year. Together with our allies and the Afghan government, we have agreed that this is the year we will conclude our combat mission in Afghanistan. This is also a year of political transition in Afghanistan. Earlier this spring, Afghans turned out in the millions to vote in the first round of their presidential election -- defying threats in order to determine their own destiny. And in just over two weeks, they will vote for their next President, and Afghanistan will see its first democratic transfer of power in history.

In the context of this progress, having consulted with Congress and my national security team, I’ve determined the nature of the commitment that America is prepared to make beyond 2014. Our objectives are clear: Disrupting threats posed by al Qaeda; supporting Afghan security forces; and giving the Afghan people the opportunity to succeed as they stand on their own.

Here’s how we will pursue those objectives. First, America’s combat mission will be over by the end of this year. Starting next year, Afghans will be fully responsible for securing their country. American personnel will be in an advisory role. We will no longer patrol Afghan cities or towns, mountains or valleys. That is a task for the Afghan people.

Second, I’ve made it clear that we’re open to cooperating with Afghans on two narrow missions after 2014: training Afghan forces and supporting counterterrorism operations against the remnants of al Qaeda.

Today, I want to be clear about how the United States is prepared to advance those missions. At the beginning of 2015, we will have approximately 98,000 U.S. -- let me start that over, just because I want to make sure we don’t get this written wrong. At the beginning of 2015, we will have approximately 9,800 U.S. servicemembers in different parts of the country, together with our NATO allies and other partners. By the end of 2015, we will have reduced that presence by roughly half, and we will have consolidated our troops in Kabul and on Bagram Airfield. One year later, by the end of 2016, our military will draw down to a normal embassy presence in Kabul, with a security assistance component, just as we’ve done in Iraq.

Now, even as our troops come home, the international community will continue to support Afghans as they build their country for years to come. But our relationship will not be defined by war -- it will be shaped by our financial and development assistance, as well as our diplomatic support. Our commitment to Afghanistan is rooted in the strategic partnership that we agreed to in 2012. And this plan remains consistent with discussions we’ve had with our NATO allies. Just as our allies have been with us every step of the way in Afghanistan, we expect that our allies will be with us going forward.

Third, we will only sustain this military presence after 2014 if the Afghan government signs the Bilateral Security Agreement that our two governments have already negotiated. This Agreement is essential to give our troops the authorities they need to fulfill their mission, while respecting Afghan sovereignty. The two final Afghan candidates in the run-off election for President have each indicated that they would sign this agreement promptly after taking office. So I’m hopeful that we can get this done.

The bottom line is, it’s time to turn the page on more than a decade in which so much of our foreign policy was focused on the wars in Afghanistan and Iraq. When I took office, we had nearly 180,000 troops in harm’s way. By the end of this year, we will have less than 10,000. In addition to bringing our troops home, this new chapter in American foreign policy will allow us to redirect some of the resources saved by ending these wars to respond more nimbly to the changing threat of terrorism, while addressing a broader set of priorities around the globe.

I think Americans have learned that it’s harder to end wars than it is to begin them. Yet this is how wars end in the 21st century -- not through signing ceremonies, but through decisive blows against our adversaries, transitions to elected governments, security forces who take the lead and ultimately full responsibility. We remain committed to a sovereign, secure, stable, and unified Afghanistan. And toward that end, we will continue to support Afghan-led efforts to promote peace in their country through reconciliation. We have to recognize that Afghanistan will not be a perfect place, and it is not America’s responsibility to make it one. The future of Afghanistan must be decided by Afghans. But what the United States can do -- what we will do -- is secure our interests and help give the Afghans a chance, an opportunity to seek a long, overdue and hard-earned peace.

America will always keep our commitments to friends and partners who step up, and we will never waver in our determination to deny al Qaeda the safe haven that they had before 9/11. That commitment is embodied by the men and women in and out of uniform who serve in Afghanistan today and who have served in the past. In their eyes, I see the character that sustains American security and our leadership abroad. These are mostly young people who did not hesitate to volunteer in a time of war. And as many of them begin to transition to civilian life, we will keep the promise we make to them and to all veterans, and make sure they get the care and benefits that they have earned and deserve.

This 9/11 Generation is part of an unbroken line of heroes who give up the comfort of the familiar to serve a half a world away -- to protect their families and communities back home, and to give people they never thought they’d meet the chance to live a better life. It’s an extraordinary sacrifice for them and for their families. But we shouldn’t be surprised that they’re willing to make it. That’s who we are as Americans. That’s what we do.

Tomorrow, I will travel to West Point and speak to America’s newest class of military officers to discuss how Afghanistan fits into our broader strategy going forward. And I’m confident that if we carry out this approach, we can not only responsibly end our war in Afghanistan and achieve the objectives that took us to war in the first place, we’ll also be able to begin a new chapter in the story of American leadership around the world.