First: Pluto squared Uranus when it was discovered in 1930 {chart}. And I need to update this and this.

[8:08 AM 4/19/2014] Changing title from Grand Cross: Uranus-Pluto Square (2012–2015) to 2014 Grand Cross: Pluto. Moving from slowest (Pluto, in this LJ) to fastest (Uranus, Jupiter, Mars in future posts). Backdated Pluto Demoted for the charts. Ready to post three charts when Aeneas conjunct Mars/Lucifer. What the Shield of Aeneas has to do with Pluto I don't know, but Aeneas is also opposite Uranus.

More about "Tecumseh": When Does the Revolution End? — Native Americans were still fighting to hold their land after British and Americans signed the Treaty of Paris in 1783. Whether they aligned with French, British or American, "the American Revolution was an unmitigated disaster". Tecumseh, born March 1768 (Pluto ♑13°), seems to bridge 1795 (if not earlier), the end of the Northwest Indian War to the War of 1812. Pluto made its final ingress to Pisces in 1798, starting the 1800s in Pisces, making its final ingress to Aries in 1822. By 1822, the Unites States consisted of 24 states. Red Cloud was also born in 1822; Pluto in Taurus during Red Cloud's War & Custer's Last Stand (Sitting Bull, btw, fought in both).

Is there a corresponding Pluto in [sign] for Native Americans? If Pluto in Capricorn represents the astrological birth of the United States, it also means the end of a multitude of Native American nations on tribal lands. So I'm still investigating how to best illustrate this on the Pluto Table. IOW, the United States could have already experienced a Pluto Return in (probably) Sagittarius. And it's that return that may be specifically related to Native Americans.

[1:26 PM 4/23/2014] He has excited domestic insurrections amongst us, and has endeavored to bring on the inhabitants of our frontiers, the merciless Indian savages, whose known rule of warfare, is undistinguished destruction of all ages, sexes and conditions. (Declaration of Independence). 1763 is the year: How a treaty sparked a North American revolution.

The world ended with the Treaty of Paris in 1763, and we are still living with the consequences. Six men made the critical decisions: young King George III of Britain and old King Louis XV of France; their chief ministers the Earl of Bute and Duc de Choiseul; and their negotiators the Duke of Bedford and Duc de Nivernois. They argued for months over the fate of a few small islands. Then with what Francis Parkman called a "scratch of a pen," [+][+] they casually disposed of continents that they had never seen, and could scarcely imagine. It was one of the great moments of contingency in modern history, and the starting point for this remarkably fresh and original book.

Interesting discussion about National Charts, specifically England. Got me wondering which chart for the British? Apparently there are two epochs defined as British Empire; see The Founding of the Second British Empire, 1763-1793 by Vincent T. Harlow; from The Oxford History of the British Empire: Volume V: Historiography, "The First British Empire", by P.J. Marshall:

By 1929, the tradition that British Imperial history could be divided into phases, with an 'old' or 'first' Empire separate from what was to follow, was long established. It was a tradition that went back into the first half of the nineteenth century …it was clear that there had been two Empires and that the first had been based on an 'old colonial system' …Throughout its long usage, there has been a rough consensus as to what is meant by the term 'first British Empire', even if some points have been contested. There has never been any doubt about the geographical extent of the first Empire. It was an Atlantic Empire, based on North America and the West Indies. The spread of British dominion into Asia, Africa, and Australasia was one of the indications that the first Empire was giving way to a second one. There is general agreement too that the first Empire was based on a system of commercial regulation. …If the loss of the American colonies in 1783 seemed to be the terminal crisis of the first Empire, the birth of a second Empire is less easy to date. For some historians it did not come into existence until 1815 or even later; others see a second Empire overlapping the first from 1763. 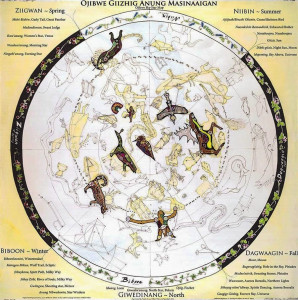 Brown notes Pluto in Jupiter-ruled Sagittarius (from 1995 to 2008) involves Expansion, best defined by Super Size Me; Pluto in Saturn-ruled Capricorn (from 2008 to 2024), best defined by Civilizing Power & Security. Astrologically, if Jupiter expands (remember those Jupiter Trojans), then Saturn contracts (at the boundary between visible and non-visible to the naked-eye). Brown also explains how interacting dynamics (rulership, houses, generations) and why Pluto's move from Sagittarius to Capricorn is a "rending cultural jolt". [Jupiter is also part of the Grand Cross; the only exalted planet in the square, conjunct Sirius at Cancer 14°, and the Sabian symbol is suggestive: In a sumptuous dining hall guests relax after partaking of a huge banquet.]

• The Indian wars of Pennsylvania: "It is said that Washington fired the first shot in this skirmish, the opening conflict of the French and Indian War." {158} …Scarouady gave the following account of events leadiing up to the fight with Jumonville and the part that the Indian allies took in the same: …"As we were on the road going to Council with our brethren, a company of French, in number thirty-one, overtook us and desired us to go and council with them; and when we refused, they pulled us by the arm and almost stripped the chain of covenant from off it, but still I would suffer none to go with them."

• (88611) Teharonhiawako — (2001 QT297). TransNeptunian Object. Discovered 2001 Aug. 20 by the Deep Ecliptic Survey. In the Haudenosaunee (Iroquois) creation myth Teharonhiawako was a son of the granddaughter of the Great Spirit creation god. He became a farmer and was loved by the people. The companion object (88611) Teharonhiawako I, discovered 2001 Oct. 11 by J. L. Elliot, S. D. Kern and D. J. Osip, is named for his twin brother Sawiskera. Sawiskera was a skilled hunter but was jealous, cruel and destructive, and he was eventually conquered by his brother. The names were suggested by R. J. Benecchi and S. D. Kern.

• Ghent Chart: "The ceremony of signing is set for three o'clock, but the Americans are not ready and cannot meet for another hour. At four, their carriage draws up before the big, grey convent of Chartreux… Then with pen and ink, sand and sealing wax, the documents are rendered official, subject to ratification in Washington and London… It is half-past six on Christmas Eve…", Pierre Berton, Flames Across the Border: 1813-1814

It was at the Great Council of Niagara that, using Aboriginal diplomacy and traditions (which included the Covenant Chain Wampum Belt commissioned by the Crown), the Western Nations ratified King George III's Royal Proclamation of 1763. The Treaty of Niagara extended the ancient Silver Covenant Chain of Friendship (first forged between the Haudenosaunee Confederacy and Dutch settlers at Albany in 1613) west across the Niagara River, establishing the key Crown-First Nations relationship for what would become Canada.

Capricorn 1-2° Three rose windows in a gothic church, one damaged by war

An Ojibwa Legend: Eventually, one summer there were no roses. Bees hungered; humming-birds grew thin; the bears raged. In later years, that summer was known as the Summer of the Disappearance of the Rose. At last, everyone was alarmed. In desperation, a great meeting was called. Everyone was invited.

{4} The Rhetoric of Reaction by Albert O. Hirschman (Review).