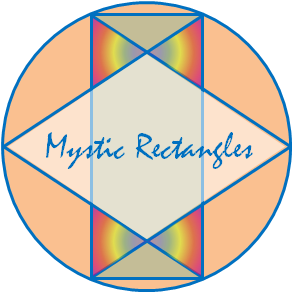 Mystic rectangle is a modern term for a planetary configuration composed of two trines that are connected by two sextiles. To qualify as a mystic rectangle, the pairs of planets on opposite sides of the horoscope from each other must form oppositions. Despite the name, individuals with mystic rectangles in their natal charts need not be mystically inclined. The name seems to have originated with Madame Helena Blavatsky, one of the founders of the Theosophical Society, who had this configuration in her chart. •

Checking Meredith Kercher's birth chart (28-Dec-1985, time unknown), for 6:00am* noticed collapsing mystic rectangle involving Moon and True Node, which do not sextile on this chart. That sextile occurred earlier during the Full Moon on 27-Dec-1985 @ 07:30 UTC {chart; with Royal Stars}. Meredith was born during a full moon, and if she wasn't killed during the Last Quarter Moon on 01-Nov-2007 @ 21:18 UTC [+], her body was certainly discovered during that time.

If only the four major phases of the moon are considered, the Nencini verdict occurred during the Last Quarter on 24-Jan-2014. When the sub-phases are considered, the verdict occurred during the Balsamic Moon. Jan 30th Moon is also a Dark Moon. Additionally, there were two New Moons in January 2014 and the second new moon (Jan 30th) is also a Black Moon. There seems to be a pattern of Full Moon (Birth), Last Quarter (Death), New Moon (Verdict) where the next moon to look for is the First Quarter. Note: Both Guede (1986) and Sollecito (1984; chart) were born during Last Quarter Moons; Knox has a Gibbous moon, born during a First Quarter phase (1987; chart).

Meredith was born after "six o'clock in the evening" [+]. Moon changed from Cancer 23° to 24° approximately 7:19pm; La Volasfera symbol for Cancer 24° A horseman armed, moving across a desert towards some woody hills.

This chart shows asteroid (499) Venusia☌Sun — named for Tycho Brahe's insula Venusia. One of the more interesting analysis of this case involves Sun-Venus conjunctions: [+][+][+][+][+]. 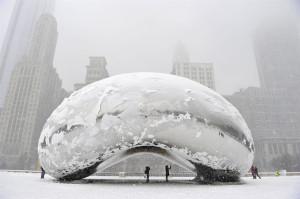 The Greeks were about to pack up and go home when the goddess Athena appeared in a dream to a seer named Prylis and inspired him with the fabled stratagem that finally ended the Trojan War. It was a hollow wooden horse… •

Two episodes involving women leaders are notable examples of Protesilaos's correction and emendation of the poetic accounts. The first concerns Hiera [7119; Jupiter Trojan (L4)], the warrior queen of the Mysians who led the Mysian women into battle with the Achaeans alongside the male warriors. Protesilaos, who fought in that battle on the Achaean side, maintains that she was the most beautiful of all women, surpassing Helen, and that to exalt Helen Homer omitted all mention of Hiera from his poems (Her. 23.28–29). • 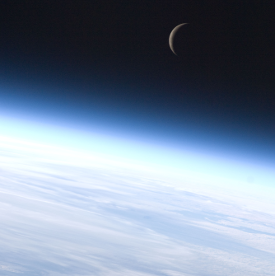 Earlier this week, Universe Today challenged North American readers to spot the slender, exceptionally “young” crescent Moon on the evening of New Year’s Day. Three visual athletes based in Arizona took up the challenge on Wednesday evening, with amazing results. Mike Weasner, Rob Sparks and Jim Cadien managed to spot the razor thin crescent Moon just 13 hours and 48 minutes after it passed New phase earlier on January 1st… Weasner also noted that a bright Venus aided them in their quest. It’s strange to think that Venus, though visually tiny, is actually intrinsically brighter than the limb of the Moon, owing to its higher albedo. In fact, some great pictures have also been pouring in to Universe Today of Venus as it heads towards inferior conjunction this month on January 11th. •
Triple Goddess
Maiden · Mother · Crone
Waxing Crescent · Full Moon · Waning Crescent

…there are two crescents and two Maidens; the Bright Maiden corresponding to the waxing moon, curving toward the right. The Dark Maiden corresponds to the waning crescent, curving toward the left. In older mythic systems, these maidens can be seen on the labyris or double-bladed ax, once used by Amazons as a tool and weapon. —Shekhinah Mountainwater

Posted young crescent moon and triple goddess to help clarify "the next moon to look for is the First Quarter". The Bright Maiden. The waning dark phase of the Moon is elastic — it's malleable and feminine. The waxing crescent is an important element in different cultures and religions — it's patriarchic and masculine. While the time of the Nencini verdict is definitely influenced by the New Moon, it's still dark. Perhaps Nencini's statement during the appeal, "there is time for every request", illustrates a mutable, yet untaken, opportunity.

Speaking of timing: neither Meredith's or Guede's exact time of birth are known. Only Sollecito & Knox charts available at Astro-Databank (see links above) with AA Rodden Ratings — highest and most accurate rating. The other two charts (with hopefully similar accuracy) would provide professional astrologers (which i'm not) an opportunity to provide a more thorough and complete analysis (especially synastry). Eg., someone noted a lack of Air in Sollecito & Knox charts. Not quite true, but none of the planets appear in Air signs. Meredith's Jupiter is in Aquarius. Guede, however, has an interesting Moon in Via Combusta. On 26-Dec-1986, the Moon ranged from Libra 23°38′59″ (Air) to Scorpio 7°30′12″ (Water). The only ‘safe’ haven or ‘protected’ degree is Libra 24° (which has a very interesting Sabian, btw).

Instead of two separate moon phase timelines (one for Guede, another for Sollecito/Knox), decided to combinine the two. Starting from arrests for all four.

• The Maidan: Ukraine Announces Accord to End Crisis (21-Feb).