A Prophecy Against Damascus

i was reading about transgender vets and saw this on the sidebar. then i made coffee… 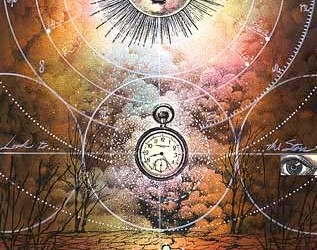 So there's the Neptune-Pluto megacycles described by Palden Jenkins. Precession of the equinoxes (Axial precession): 26,000 years or 1° every 72 years.

Precession is the cycle the Four Royal Stars of the Persians are describing. What else? Persians are in the Middle East, right?

It's sometimes hard dealing with the most translated book on the planet. innit?

trends, undercurrents and threads… unfolding by centuries, decades, years,
months and weeks, days and hours, minutes and seconds… a psychological motion
oozing, leaking and expressing itself into the world throughout history

Perhaps, astrology provides another source of narrative imagination because, essentially, astrology's about personal timepieces synched to a cosmic timepiece. YMMV.

Taking the issue of Syria to the Congress, imho, removes the American psychosphere from automatic pilot. Of course, boiler-plate scenarios are present. But a wider imaginative toolbox is more useful for consensus. So yes, I think the keyword here is:

AQ 1897 = As I transition into this next phase of my life, I want everyone to know the real me. I am Chelsea Manning. I am a female = It is extraordinary that they were able to overcome threats and violence to express their democratic right.

It is not surprising, therefore, that some gods were represented with keys, those of the region which they guarded or which was sacred to them, or that the Key became a symbol of power—the power which was represented in the opening or closing of the doors of that region to allow or prevent entrance or egress. This was more marked in Greek and Roman mythology, in certain of the divinities bear the title κλειδούχος, claviger. Janus, as god of doors, is said to have been represented 'cum clavi et virga' in left and right hands—the key and the rod of the Roman doorkeeper. He sits guarding the gates of heaven with the Hours. At morning the doors of heaven are opened to let out the day, and they are shut again at night. Even more universally he was κλειδούχος, since all things—heaven, sea, clouds, and earth—were opened by his hand. [Ovid, Fasti, i. 99, 117 ff.; Macrobius, I. ix. 7.][+][+]

AQ 1137 = κλειδούχος = THE ICARIAN PERSONALITY AS HAVING A HIGH DEGREE OF PHALLIC NARCISSISM.

Weinberger and Muller (1974) interpreted the Icarian personality from a psychoanalytic point of view against the background of a case study. They described the Icarian personality as having a high degree of phallic narcissism. Their discussion was concentrated on the let-down periods (the »fall») which can follow intensive peak experiences of these persons. For the interpretation of these periods they introduced the concept of »boredom», which in their opinion »greatly extends the explanatory value of Murray's Icarus metaphor in the analysis of pseudo-depressive symptoms in phallic characters» (1974, p. 585). Eisnitz (1974), another psychoanalyst, on the following pages of the journal in which the article just cited appeared presented his own ideas on boredom and Weinberger et al. in a reply (1975) tried to clarify the difference between their respective points of view. Fried (1977a) argued strongly against the view that Icarian individuals have only a phallic fixation. His review of earlier works revealed highly divergent ideas regarding the severity of Icarian traits. Sometimes such traits are considered to be phallic, i.e. »nearly normal», whereas sometimes they are considered as oral or claustral in character, i.e. as signs of a more severe disturbance. Murray seemed to vacillate between these two interpretations. Fried suggested »that this split in expert opinion parallels the split in the patient's own personality between his grandiose ego-ideal and his devalued, piteous, crazy alter ego» (1977a, p. 83). He continued: »By undertaking a detailed analysis of a few of my patient's interrelated symbols, I hope to show why they so easily lend themselves to a relatively benign interpretation, and why I nevertheless think that emphasis on their archaic and pathological character is at once theoretically more valid and therapeutically more helpful.» (1977a, p. 85). [+]