Neptune, God of the Sea 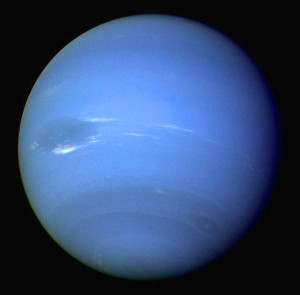 Neptune is the eighth and farthest planet from the Sun in the Solar System. It is the fourth-largest planet by diameter and the third-largest by mass… Named for the Roman god of the sea [Greek: Poseidon (#4341 & Uranian)], its astronomical symbol is ♆ [&#9798;], a stylised version of the god Neptune's trident… Unexpected changes in the orbit of Uranus [discovered 13-Mar-1781] led Alexis Bouvard to deduce that its orbit was subject to gravitational perturbation by an unknown planet. Neptune was subsequently observed on 23 September 1846 by Johann Galle [(2097) Galle] within a degree of the position predicted by Urbain Le Verrier [(1997) Leverrier & hypothetical], and its largest moon, Triton, was discovered shortly thereafter, though none of the planet's remaining 13 moons were located telescopically until the 20th century [14th Neptune moon discovered 01-July-2013]. Neptune has been visited by only one spacecraft, Voyager 2, which flew by the planet on 25 August 1989. —Wikipedia

Cafe Astrology: Neptune's glyph, or symbol, resembles the trident that the god Poseidon/Neptune is often shown holding. The crescent, representing receptivity, is pointing upwards, indicating spiritual receptivity, and is placed above the cross of matter. This symbolizes the yearning of the soul to break free from the restrictions and limitations of matter/reality.

Astrologically, modern Western astrologers associate the planet Neptune with creativity, idealism and compassion, but also with illusion, confusion, and deception. Neptune governs hospitals, prisons, mental institutions, and any other place, such as a monastery, that involves a retreat from society. Its appearance coincided with the discovery of anesthetics and hypnotism. In political terms, Neptune was linked to the rise of nationalist movements throughout Europe in countries like Germany, Italy, Hungary, Ireland, and Serbia, seeking independence for their nations inspired by an idealized past of legend. It was also linked to the rise of socialism and the beginnings of the welfare state. Neptune coincided with the utopian ideals of Communism, when Marx and Engels first published 'The Communist Manifesto' in 1848. —Wikipedia

12th House – Beyond the Personal: This house represents those spheres of life in which the individual no longer plays a part, where we step back for a greater whole or lose ourselves in one. Traditional astrology sees hospitals, prisons and psychiatric institutions in this house. It is also associated with monasteries and any other retreats. —Astro.com

Petroleum: The question of what constituted the first commercial oil well is a difficult one to answer. Edwin Drake's 1859 well near Titusville, Pennsylvania, is popularly considered the first modern well. Drake's well is probably singled out because it was drilled, not dug; because it used a steam engine; because there was a company associated with it; and because it touched off a major boom. However, there was considerable activity before Drake in various parts of the world in the mid-19th century. [28-Aug-1859 @ (various times) @ 7:56am (13:14:40UT), Titusville, PA (41n38, 79w40) / Neptune Pisces 26°]. —Wikipedia

On January 10, 1901, a well at Spindletop struck oil ("came in"). The new oil field soon produced more than 100,000 barrels (16,000 m3) of oil per day. Gulf Oil and Texaco, now part of Chevron Corporation, were formed to develop production at Spindletop. The strike at Spindletop represented a turning point for Texas and the United States; no oil field in the world had ever been so productive. The frenzy of oil exploration and the economic development it generated in the state became known as the Texas Oil Boom. The United States soon became the world's leading oil producer. —Wikipedia

{Astro-Databank: Spindletop} [10-Jan-1901 @ 10:32am (16:32UT), Beaumont, TX (30n05, 94w06) / Neptune Gemini 27°] American oil well known as the Spindletop Gusher credited with being the origin of the 20th-century petroleum industry in the United States leading directly to our "car culture," highways and urbane mobility.

The Twelfth House: Thank goodness Dane Rudhyar, the father of modern astrology, declared, “There are no bad houses.” [1] And so modern astrologers, like a happy Extreme Makeover crew, took their axes to this structure of doom. They hollowed out its dingy cells and remade the 12th into a vast womb of invisible potencies. It is now the matrix of divine unity, holding the Oneness from which we all emerge and to which we all return. Draped in the gauzy veils of Neptune and Pisces, the 12th has become an inner dream factory, residence of the collective unconscious, wellspring of symbols and archetypes, favorite haunt of the imagination. It is a house of intuition, compassion and spiritual transcendence. You’re advised to serve here, so that you don’t have to suffer. For even modern astrologers couldn’t erase all the difficulties in this house. They warn that in such a potent unbounded space, you can easily lose your bearings. Functions and gifts of planets here may be hard to access. You might lack a clear life direction or be confused about who you are. You may feel shy, insignificant, or anonymous—or you could suffer from delusions of grandeur. Saviors and martyrs live here. Your psychic boundaries might be so porous, you could be an easy mark for predators, or become a slick predator yourself. All of this could drive you to deception and drink. —Dana Gerhardt

The discovery of Neptune was filled with confusion compared to the discovery of Uranus which was filled with surprise… The La Volasfera picture of the 26th degree of Aquarius is particularly apt. It is, "A man walking blindfold towards the opening of a deep pit." The author goes on to explain that, "this indicates one whose thoughts and projects are liable to become chaotic and confused… it may be from ignorance or from want of alertness and responsiveness to his surroundings that he will come by hurt to himself, but save by the helping and directing hand of some wise friend or overarching love of Heaven, he cannot escape downfall and ruin." He calls it a degree of "Blinding."

Charubel says that there is no symbol for this degree, that it is a degree of mystery! [It is allied to the fourth dimensional space. Denotes one who has SOMETHING not in common with the rest of the race]. Kozminsky says the degree, "denotes one of mystic and reformative learnings who may be impressed by the invisible forces for certain work on earth, but who may not be conscious of the part he is called upon to play. He should never permit himself to be hypnotized or entranced, nor yield his will to the power of another in the body or out of it. It is a symbol of Service." [Symbol: Three fires blazing above three triangular hills, a cross-sword floating in air above]. Jeryl Keane describes the degree as, "dramatic, not always emotionally stable, but certainly with a good deal of charm." The Sabian Symbol is, "A garageman testing a car's battery with a hydrometer." The degree symbols given here for Neptune seem to work extremely well in expressing the characteristics of the planet. —StarIQ.com

The Sword Sent Down From Heaven :: "I was told in a dream that the two Deities the Heaven-Shining-Great-Deity and the High Integrating Deity commanded and summoned the Brave-Awful-Possessing-Male-Deity, and charged him [thus]: 'The Central Land of Reed-Plains is painfully uproarious,—it is. Our august children must be ill at ease. As [therefore] the Central Land of Reed-Plains is a land which thou specially subduedst, thou the Brave-Awful-Possessing-Male-Deity shalt descend [thither].' Then he replied, saying: 'I will not descend [myself], but I have the cross-sword wherewith I specially subdued the land. (The name by which this sword is called is the Deity Thrust-Snap; another name by which it is called is the Deity Awful-Snap, and another name for it is the August-Snap-Spirit, This sword dwells in the temple of the Deity of Isonokami) The manner in which I will send this sword down will be to perforate the ridge of [the roof of] Takakurazhi's stone-house, and drop it through. (So the Brave-Awful-Possessing-Male-Deity instructed me, saying: 'I will perforate the ridge of [the roof of] thy store-house, and drop this sword through.) So do thou, with the good eyes of morning, take it and present it to the august child of the Heavenly Deity.' So, on my searching my store-house early next morning in accordance with the instructions of the dream, there really was a cross-sword there. So I just present this cross-sword to thee." The Kojiki, translated by Basil Hall Chamberlain

PHASE 326 (AQUARIUS 26°): A GARAGE MAN TESTING A CAR'S BATTERY WITH A HYDROMETER.

KEYNOTE: Skill in applying knowledge of natural laws to the solution of everyday problems resulting from life in our technological society.

Here we see a man using his analytical mind to check up on the operation of the machines his inventive genius produced. This simple commonplace operation is used here as an indication of how deeply technology involves us in small matters, yet matters which in some circumstances could make the difference between life and death — i.e. a mechanical failure in a car on a crowded freeway. The need for "management" therefore is seen to affect every detail of our individual lives; this applies as well to the complexities of interpersonal, social or political relationships, because our modern society is indeed like a huge machine speeding on dangerous ground. Safety depends on available power.

This is the first of five degree symbols in the sixty-sixth sequence. It tells us that we constantly need the use of our intellectual power of observation and analysis to check on the effectiveness of the energies at our disposal. It is a symbol of MENTAL EFFICIENCY.

Sabian: Virgo 26-27° A Group Of Aristocratic Ladies Meet Ceremonially At A Court's Function • La Volasfera: Virgo 26-27° A broken hammer or mallet, lying upon a, carpenter’s bench § Meaning: It denotes a person of a peculiarly incapable nature, unhappy disposition, and a certain awkwardness in his bearing. He will suffer ills through want of practicalness and executive power, and by reason of his backwardness will be liable to be victimized and deceived by the more active and wary. It is a degree of BLUNTNESS.