realized yesterday i was on the fence about two things: {1} Primary Hillary, and {2} Obama Style.

Smartypants sums up: Hillary Clinton has some work to do. i have no problems voting for Hillary, but realize many are still angered by events that occurred during the 2008 Democratic primaries. imho, the impetus for Primary Hillary could come from both Hillarybots & Obamabots. for folks like me, where all is forgiven, does that put our Hillary votes at risk? because, to be honest, no, Hillary isn't quite the candidate I'm looking for. this isn't the #1 thing about an 2016 Obama Style presidency, but in 2008 it was: 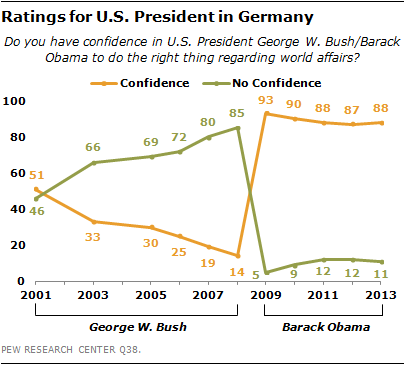 while international confidence isn't in my top ten for 2016, it's still something worth considering.

keeping this (Avoiding the poutrage) in mind for my own virtue & sanity: this doesn't help. why it doesn't help is the #1 challenge understanding today's political dynamics. but, considering those specific issues: can Hillary do better? and if not, who can?

i want a 2016 Democratic presidential candidate (just as i did in 2008) that appeals to a wide spectrum of voters sharing similar concerns and values (that includes climate change). it's the basic jumping off point to get a solid GOTV, to get a president in office, to get a better politics more aligned with a majority of Americans. i would like to think that Hillary is that candidate, but after yesterday i realized the musical chairs aspect of 2016.

is poutrage just changing positions? because, as far as i see it, there is no equivalence here (can't stress this enough). as a feminist, i'm aware that the non-issue with President Obama is that… he's a guy :). but seriously. the first female president may require a bit more effort on all our parts to ensure we have her back. race is one thing, gender is different. imho, gender will prove to be the "horrendum mysterium" [broken link, see wayback & note below] in that political atmosphere. iow, what is silent today (race) may not be so silent tomorrow (gender).

During the early to mid-20th century, there were a series of tremendous social upheavals and political events in mainland China, which brought about enormous social and political change in the country. Although many of the largest political events and movements have been exhaustively studied, there remain many compelling and overlapping political movements which still need to be examined in order to come to a broader understanding of the "modernization" of China from other perspectives. It is the aim of this book to closely examine one relatively small but significant political phenomenon, largely neglected until now, and to use it as a prism to shed some light upon the subjectivity of Chinese peasants in the context of revolutionary China as well as China's efforts at modernization. This political phenomenon is called Suku. By analyzing Suku from the joint perspectives of political identity and subjective psychological identity, this work aims to postulate a new paradigm for discussing social suffering, collective confession in a political context and the subjective individual suffering through narration.

What Women Want: The Ideas of the Movement
Gayle Graham Yates

The desired and sometimes realized effect of consciousness-raising is sisterhood and cohesive political action. This kind of political action is new. It is personal and interactive rather than structural.

Consciousness-raising began as a deliberate method at the start of the women's liberation movement in Chicago and New York in 1968. During the first meetings of the New York Radical Women, the members sought a way to talk to each other in specifically radical feminist terms. Carol Hanisch and Kathie Amatniek {Consciousness-Raising: A Radical Weapon} [broken link, see wayback & note below] had become impressed during their year in Mississippi with the Student Nonviolent Coordinating Committee by the way in which black people spoke up in testimonials about what had been done to them by "the Man." They also reminded themselves of Mao's slogan, "Speak pain to recall pain." The plan of "going around the room" gave quiet as well as articulate members a chance to share feelings and experiences that showed their common oppression by men as they focused on questions such as, "If you've thought of having a baby do you want a girl or a boy?" "What happens to your relationship when your man earns more money than you, and what happens when you earn more money than him?"

Redstockings, in conjunction with its "prowoman line," formulated the first full guidelines for consciousness-raising. The document, called "Protective Rules for Consciousness-raising" and written in 1968, was read at the beginning of each session.

The following represents a compilation and expansion of text, notes and comments from a talk Kathie Sarachild gave on consciousness-raising to the First National Conference of Stewardesses for Women's Rights in New York City, March 12, 1973. Sarachild outlined the original program for "Radical Feminist Consciousness-Raising" which was presented at the First National Women's Liberation Conference outside Chicago, November 27, 1968.