Transit of Venus Images From the ISS
@astro_Pettit • Expedition 31 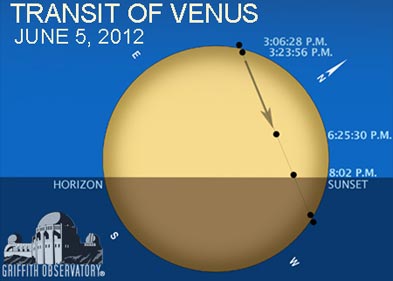 Visibility: The first of two total lunar eclipses in 2004 is best seen from the Eastern Hemisphere. The eclipse occurs 1 1/3 days before perigee so the Moon will appear rather large (33.1 arc-minutes). During this event, the Moon is low on the ecliptic in western Libra just 1.5° south of the 2.8 magnitude star Zuben Elgenubi (Alpha Librae)… Major Phases: [P1][U1][U2][Greatest][U3][U4][P4]… At the instant of greatest eclipse (20:30 UT), the Moon will lie in the zenith for observers near northern Madagascar… The eclipse will be widely visible from the Europe, Africa, Asia and Australia. North America will miss the entire event, but most of South America will witness the last stages of the eclipse which will already be in progress at moonrise. Similarly, the Moon sets in eastern Asia and Australia during various stages of the eclipse.

Scorpio 14-15° Children Playing Around Five Mounds Of Sand
KEYNOTE: Early steps in the development of a mind seeking to be attuned to the higher level of human evolution.

Visibility: No living person has seen a transit of Venus because the most recent one occurred in 1882. This situation is about to change since Venus will transit the Sun on Tuesday, 2004 June 08. The entire event will be widely visible from the Europe, Africa and Asia as shown in the map in Figure 1 (Low Res or High Res). Japan, Indonesia, the Philippines and Australia will witness the beginning of the transit but the Sun will set before the event ends. Similarly, observers in western Africa, eastern North America, the Caribbean and most of South America will see the end of the event since the transit will already be in progress at sunrise from those locations.

Gemini 17-18° Two Chinese Men Converse In Their Native Tongue In An American City
KEYNOTE: The need for the mind to retain its independence from its physical environment in order to concentrate on its special problems.

Visibility: On 2012 May 20/21, an annular eclipse of the Sun is visible from within a narrow corridor that traverses Earth's northern Hemisphere. The path of the Moon's antumbral shadow begins in eastern Asia [annular path begins in southern China at 22:06 UT …Tokyo lies 10 kilometres north of the central line. For the over 10 million residents within the metropolitan area, the annular phase will last 5 minutes beginning at 22:32 UT (on May 21 local time). The annular ring is quite thick because the Moon's apparent diameter is only 94% that of the Sun. Traveling with a velocity of 1.1 kilometres/second, the antumbral shadow leaves Japan and heads northeast] and crosses the North Pacific Ocean [The instant of greatest eclipse occurs at 23:52:47 UT… the Sun is 61° above the flat horizon formed by the open ocean. The shadow passes just south of Alaska's Aleutian Islands as the central track slowly curves to the southeast. After a 7000 kilometre-long ocean voyage lasting nearly 2 hours, the antumbra finally reaches land again] where it ends in the western United States [along the rugged coastlines of southern Oregon and northern California at 01:23 UT (May 20 local time). Redding, CA lies 30 kilometres south of the central line. Nevertheless, it still experiences an annular phase lasting 4 1/2 minutes beginning at 01:26 UT …the antumbra begins its rise back into space above western Texas as the track and the annular eclipse end]…

Water War in the Klamath Basin: Macho Law, Combat Biology, and Dirty Politics: The water conflicts in the basin are in part an illustration of the inevitable tension between an extractive economy and an ecosystem service economy. Focusing solely on the economic impact of water allocation decisions on farmers, fishers, and tribal members, however, elides the emotional overtones of those conflicts, which are often the strongest driving forces. Farmers, fishers, and tribal members are not simply the calculating economic actors that Chicago-school economics posits. They are people striving to realize their differing but deeply held views about what makes a human life satisfying and worthwhile. Their predecessors are closely bound up with their interactions with the natural world. We refer to such noneconomic attachments to lifestyle generally as "cultural" claims. The centrality of decisions about natural resources to the cultural of various groups makes those conflicts more intense and harder to resolve. It is difficult for the contending groups to empathize with, or even to understand, the claims of their opponents because their own point of view is so ingrained. From an economic perspective, they may react "irrationally" to proposals to resolve the dispute. If fishing produces more net income than farming, for example, an economist might suggest either that the fishers should buy out the farmers or that the government should buy out the farmers and recover some or all of the cost of that buyout from the fishers. But if the decision to farm is based more on emotional connections to the land and community than on economic calculation, the farmers will not be satisfied with the outcome. Indeed, to the extent they see a policy choice as denigrating their cultural identity or placing another culture above theirs, they are likely to fiercely resist it even if it provides for economic compensation. The law formally recognizes such culture-based claims on the part of Indian tribes, but not on the part of farming or fishing communities, which do not fit the model of racial, ethnic, or religious groups at high risk of majority oppression. Nonetheless, culturally based appeals from such groups may carry substantial political power.

Visibility: The last Venus transit was in 2004 so the second event of the pair will occur on Wednesday, June 6 (Tuesday, June 5 from the Western Hemisphere). The entire event will be widely visible from the western Pacific, eastern Asia and eastern Australia as shown in Figure 1. Most of North and Central America, and northern South America will witness the beginning of the transit (on June 5) but the Sun will set before the event ends. Similarly, observers in Europe, western and central Asia, eastern Africa and western Australia will see the end of the event since the transit will already be in progress at sunrise from those locations. For Northern Hemisphere locations above latitude ~67° north, all of the transit is visible regardless of the longitude. Northern Canada and all of Alaska will also see the entire event. Residents of Iceland are in a unique wedge-shaped part of the path (Region X in Figure 1). They will see both the start and end of the transit but the Sun will set for a short period around greatest transit. A similarly shaped region exists south of Australia (Region Y in Figure 1), but here, the Sun rises after the transit begins and sets before the event ends. 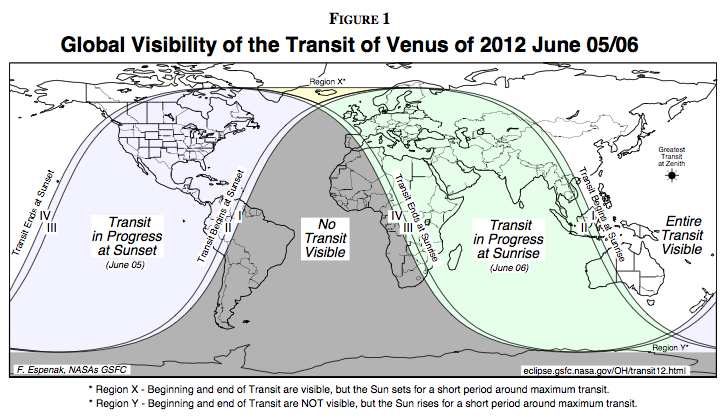 Gemini 15-16° A Woman Activist In An Emotional Speech Dramatizing Her Cause
KEYNOTE: A passionate response to a deeply felt new experience.

Venus chasers of the 18th century: One of the most important locations during the transit in June 1769 was California (then in Spanish hands) because the entire transit would be visible there. Because the Spanish had pretty much ignored the first transit, the French decided to organize their own expedition under the command of Jean-Baptiste Chappe d'Auteroche, an astronomer who had observed the first transit in Siberia… When Chappe finally arrived in Veracruz, Mexico, he found himself in the midst of a hurricane. Then he had to cross Mexico on mules to reach San Blas at the western coast and from there catch a boat to Baja California. And he was not traveling lightly: His instruments alone weighed more than half a ton. When he reached Baja, it was the end of May, only a few days before the transit on June 3.

ISS Transit of Venus: In 1768, when James Cook sailed out of Plymouth harbor to observe the Transit of Venus in Tahiti, the trip was tantamount to a voyage through space. The remote island had just been "discovered" a year earlier, and by all accounts it was as strange and alien to Europeans as the stars themselves. Cook's pinpoint navigation to Tahiti and his subsequent observations of Venus crossing the South Pacific sun in 1769 have inspired explorers for centuries. One of those explorers is about to beat Cook at his own game. High above Earth, astronaut Don Pettit is preparing to photograph the June 5th Transit of Venus from space itself. "I've been planning this for a while," says Pettit, who serves as Flight Engineer onboard the International Space Station. "I knew the Transit of Venus would occur during my rotation, so I brought a solar filter with me when my expedition left for the ISS in December 2011." Because transits of Venus come in pairs that occur once every 100 years or so, humans have rarely had the chance to photograph the apparition from Earth, much less from Earth orbit. "The Expedition 31 crew will be the first people in history to see a Venus transit from space, and Pettit will be the first to photograph one," says Mario Runco, Jr. of the Johnson Space Center (JSC). Runco, an astronaut himself who flew aboard three shuttle missions, is an expert in the optics of spacecraft windows. Along with his wife Susan Runco, who is the coordinator for astronaut photography at JSC, Mario is helping Pettit gather the best possible images of the transit. Pettit will be pointing his camera through the side windows of the space station's cupola, an ESA-built observatory module that provides a wide-angle view of Earth and the cosmos. Note: Space shuttle Endeavour named after HMS Endeavour, Cook's first ship to observe 1769 Transit of Venus.

{1} First doctor's appointment (after ER visit on May 27th) i could get is today. Note Wescott's medical issues for The Solar Eclipse: May 20, 2012 & May Prescience (medical diagnosis). Eclipses & transits are astronomical diagnostic tools. One of the tests of relativity is deflection of light by the Sun during an eclipse. And Goddard notes: For over 100 years the main quest of astronomers was to pin down the distance between Earth and Sun (the Astronomical Unit), which would give them a key to the size of the solar system. Careful studies of the transit of Venus became the gold mine they would harvest to reveal this measure. SpaceX's demonstration test flight (22-May to 31-May, launch delayed from 19-May) is another diagnostic process.

{2} Yellowknife, capital and largest city of the Northwest Territories (NWT), Canada, is one of the Canadian cities (PDF) that can view the entire Venus Transit: External Ingress 16:05:06 UT; Internal Ingress 16:22:40 UT; Greatest Transit 19:26:36 UT; Internal Egress 22:31:56 UT; External Egress 22:49:46 UT. Traditionally, First Nations people had occupied this region; by the 1930s they had a settlement on a point of land on the east side of Yellowknife Bay, Dettah… On April 1, 1999, its purview as capital of the NWT was reduced when the territory of Nunavut was split from the NWT. As a result, jurisdiction for that region of Canada was transferred to the new capital city of Iqaluit. Consequently, Yellowknife lost its standing as the Canadian capital city with the smallest population. Iqaluit, the territorial capital and the largest community of the Canadian territory of Nunavut. And Nunavut was separated officially from the Northwest Territories on April 1, 1999, via the Nunavut Act and the Nunavut Land Claims Agreement Act to provide a separate territory for the Inuit.

{3} Sedna is the Inuit goddess of the sea & scattered disk object 90377 Sedna ☌ Arizona (on 20-May-2012 eclipse center line path) & Sedna/Arizona/Gorgo one of the 90° Dial quadratures for Venus transit ☍ Pluto/Hedwig (note Ulula represents one of the 20-May-2012 eclipse quads). Also note tribal issues involving Klamath on 20-May-2012 eclipse center line path. One way to astrologically parse Wescott's May/Eclipse thoughts & determine Sedna's influence: indigenous, innate; inherent; natural. "Innate" personal issues that may be at "war" with other issues; inherent characteristics (the things that make you you) that could be mostly ignored but are coming into play; natural abilities that the eclipse/transit identifies & explores. How the status quo of our lives are maintained & ingrained. • Sabian symbol: Taurus 23-24° An Indian Warrior Riding Fiercely, Human Scalps Hanging From His Belt; Keynote: The aggressiveness of human instincts when fighting for their earthly base of operation.