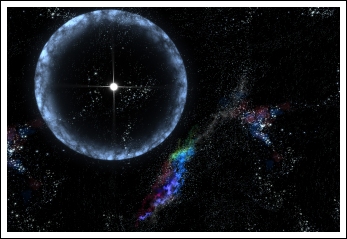 [Brightest Explosion Ever Recorded]
Posted on: Friday, 18 February 2005, 13:55 CST
"Scientists have detected a flash of light from across the Galaxy so powerful that it bounced off the Moon and lit up the Earth's upper atmosphere. The flash was brighter than anything ever detected from beyond our Solar System and lasted over a tenth of a second." [rednova provides event multimedia & links]

NUMBER: 2920
SUBJECT: Giant flare from SGR 1806-20 detected by INTEGRAL
DATE: 04/12/29 11:19:07 GMT
A large flare most likely coming from the soft repeater SGR 1806-20 has been detected with INTEGRAL on December 27 at 21:30:26 UT. The flare caused a large and rapid increase in the count rate of the SPI ACS which reached a peak flux of 2x10^6 counts/s (compared to a background level of 88,000 counts/s ). The initial spike, lasting about 1.5 s, is followed by a 300 s long tail in which pulsations at 7.57 s are clearly visible. The IBAS ACS system triggered on a fainter event occurring about 140 s before the main flare and possibly due to a precursor from the same source. [see News section for more details]

NUMBER: 2925
SUBJECT: SGR1806-20: Swift-BAT observation of the 041227 super-flare
DATE: 04/12/30 19:31:47 GMT
The Burst Alert Telescope (BAT) on Swift triggered on and recorded the super-flare outburst of SGR1806-20 at 21:30:26 2004-12-27 . We did not localize the burst because it was outside the coded aperture FOV of the instrument. The angle from the bore sight was 105 degrees, illuminating the instrument from slightly underneath the plane of the detectors through the XRT and UVOT instruments and the body of the spacecraft. Even with the absorption from this material, the main peak countrate in the detector array is saturated at 2.5E6 evts/sec (the maximum count rate the detector electronics is capable of). The FWHM of the main peak was ~0.5 sec. After the main peak, BAT recorded a series of 51 pulsations with a period of 7.56 sec and with three peaks within each pulsation.

The SGR was 31 degrees off the boresight of the 1.1 degree shielded copper collimators of the PCA and the lead collimators of HEXTE. As seen by the PCA, the precursor lasted approximately 1.2 s. After an initial pulse of the main flare, the flux was pulsed at a period of 7.579 +/- 0.002 s (non-barycentered). The PCA observed 3 peaks in the pulses, as did the BAT, during an interval of approximately 360 s. Three PCA detectors were on and recorded peak count rates of 17-25 kct/s (0.125 s bins). However, the detectors were probably saturated during the initial peak of the main flare.

[Several Astrological interpretations of Harmonic Concordance]
According to NASA and the Goddard Space Flight Center, on the evening of August 27th, 1998, a "MAGNETAR," a super dense neutron star some 26,000 light years away from us, imploded. A burst of gamma rays from the magnetar SGR 1900+14 struck the Earth's ionosphere while the west coast was in night time and the east coast was in day light. The pulse lasted about 5 minutes, during which it released the energy that is the equivalent to that which would be emitted by the Sun in 300,000 years. That burst of energy had the effect of suppressing the level of the Earth's nighttime ionosphere down to a day-like level above the roughly 4,000 mile slice of the planet which was exposed to the magnetar’s emissions. Radio transmissions were seriously affected, and many orbital satellites even went into their fail-safe modes, shutting down in order to protect their sensitive instrumentation.

In radio astronomy, it was a very big deal. Umran Inan, an internationally respected Astronomer from Stanford University, was quoted as saying, "It is extremely rare for an event occurring outside the solar system to have any measurable effect on the Earth."

Unaware of this event (indeed the general public wasn't informed of it until some 5 weeks after the fact), on the morning of August 28th, I sat at my computer and began "surfing the future." One of the several astrological programs that I have (Astrolog, V. 5.3) allowed me to see the planetary aspects as they form, from day to day, via its programmable animation function. I was looking for a specific planetary aspect pattern called the "Mystic Rectangle," but, the reason now escapes me. What caught my attention as I bounced back in forth in time that day was this startling chart, in living color.

I have been studying it ever since, and have taken the liberty of calling it the Harmonic Concordance.