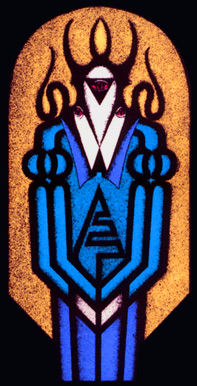 from "Psychonaut" by Peter J. Carroll (illustration by Brian Ward)

CATASTROPHE THEORY is a mathematical tool which allows sudden discontinuous changes to be represented by a topological model. Topology is sometimes called "rubber sheet geometry" in which a form can be distorted in any way so long as the basic features remain unaltered. The theory provides a qualitative but not a quantitative description of how a sudden change is likely to occur. It tells us something unusual is to be expected under certain conditions, but it does not tell us exactly when to expect it. It does, however, tell us how to provoke catastrophies. The theory is here applied to situations like initiation, illumination, and religious conversion, where there is a sudden change of state. In each case the theory describes the situation satisfactorily and also throws up much that is unexpected and valuable. It was originally my taste for perfidious wisdom that drew my attention to a theory that most mathematicians still consider "black magic," but having found it to have a certain applicability to magic I present it herewith.

I will use mainly the cusp catastrophe model shown in figure 2. The sheet with the kink in it is the catastrophe surface across which a point representing behavior can move. The Z direction is the behavior axis, and the higher up the axis on the surface it is, the more of a particular behavior it will show. A is the highest point, B is a little lower, D is lower still, and C is the lowest point. The Y axis is a control factor which tends to move behavior from D to B or from C to A when it is applied. The X axis is a second control factor which causes catastrophes. When there is a large factor of X, any change from A to C or back again will not be a smooth one, but will be a sudden change as the point falls over the edge of the fold back down onto another part of the surface. Thus, if the behavior is at point B or D, a change in the amounts of X or Y will cause only smooth continuous changes. However, if the behavior is at point A or C, any large change in Y will result in a catastrophic change as the point falls over the fold.

Applications of the Catastrophe Theory:
Occult vs. Materialist Worldviews

The Transitions: B <-------> D; an oscillation characteristic of popular occultism, where each bit of uncritically accepted nonsense changes one's mind for the few days that one can remember it.

B -------> A; an increasing sophistication of occult outlook caused by magical study and rationalization.

D -------> A; a gradual growth of an occult viewpoint caused by study of magical theories and exposure to magical experiences.

C -------> A; a sudden and discontinuous change to occult world-view caused by exposure to magical experiences.

Transitions from A are unlikely as they would involve eliminating experiences form memory. Any scheme of magical training aims to produce state A in which the subject can be discriminating about occult experience. Some masters insist on a course of mental training that initially forces the pupil into state C so that he can then make the catastrophe revision of worldview to A on being exposed to magical experiences. I tend to regard the route D --------> A (a gradual increase in both objectivity and experience) as the easiest route to engineer, although the general purpose of this book is to provoke B -------> A transitions.

Applications of the Catastrophe Theory:
Change of Belief

We can also use the catastrophe model to show a change from one belief to another. The control factors are Y, emotional commitment to one belief or the other; and X, rationality and irrationality as shown in figure 4. Types of belief (I) and (II) can range from the ideological to the religious and include such beliefs as disbelief.

The Transitions: A -------> B and C -------> D merely represent the weakening and strengthening of belief by the increase or decrease of rationality. This increase of belief with irrationality corresponds to religious revivalism and nationalism.

B -------> D; represents oscillation between rationally held beliefs (I) and (II) on an emotional basis.

A -------> C; represents catastrophic change of irrationally held beliefs (I) and (II) caused by change of emotional commitment, for example, religious conversion.

A further phenomenon can be shown on the catastrophe surface—that of bifurcation or splitting as shown in figure 5. This figure shows how a descent into irrationality produces two possibilities for strong belief which are very unstable with respect to emotional commitment. This is a technique that has its uses in magic.

The control factors are Y, mystical knowledge; and X, mystical power/expertise with gnosis as shown in figure 6.

The Transitions: D -------> A; a gradual increase in both knowledge and power, followed by the better systems.

D -------> C; power first, knowledge later. This type of training or experience often produces heresy or madness. Many mystic masters say that power on its own actually removes the candidate further from the objective of mystical initiation and erects a catastrophe barrier to further progress.

The control factors are Y, power; and X, knowledge. In a magical initiation the control factors operate the other way around because the structures of the knowledge and power are different, as are their effects on the candidate. It is often simply this difference which leads magicians and mystics to denigrate each other's systems. See figure 7.

The Transitions: D -------> A; a gradual increase in both knowledge and power.

D -------> B; power first, a dangerous path which may lead the candidate into disaster.

D -------> C; knowledge first; this type of training usually produces only a dilettante.

Thus we see why mystic masters denigrate power for its own sake. Each removes the candidate further from his objective and necessitates a catastrophic change to achieve the desired effect. Power on its own in magic and knowledge on its own in mysticism do at least bring the candidate some way forward. Both these schemes can be combined in a double catastrophe surface for which I hope the originator of the theory will forgive me. See figure 8.

Point B and C are on this surface slightly lower than D. Apart from noting how perilously thin the path D -------> A becomes at one point, I present it without further comment.