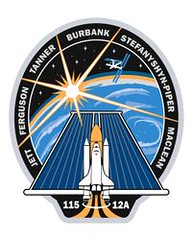 NASA Space Shuttle :: Flight Controllers at the Mission Control Center in Houston informed the STS-115 crew to hold off on stowing the Ku-Band antenna to allow for possible inspections on Space Shuttle Atlantis. An object was observed by Mission Control near the orbiter following standard tests of Atlantis’ reaction control system about 2:45 a.m. EDT today. Flight controllers continue to analyze the situation. + View video of object (Real) | + View video of object (Windows)

NASA Space Shuttle :: The Mission Control Center in Houston informed the STS-115 crew about 10:45 a.m. EDT that Wednesday’s landing attempts have been waved off due to an unfavorable weather forecast, coupled with the possibility of additional inspections of Space Shuttle Atlantis. An object was observed by flight controllers using a TV camera on the shuttle in close proximity to the spacecraft. It was observed following standard tests of Atlantis’ reaction control system about 2:45 a.m. today. Flight controllers continue to analyze the situation and are concerned the item may be something that came off of Atlantis. Space Shuttle Program Manager Wayne Hale said engineers and flight controllers are developing a plan for inspections that may be performed on Wednesday to ensure that Atlantis is safe for re-entry. Atlantis has equipment aboard that can be used to thoroughly inspect the heat shield and other areas. During the post-Mission Management Team briefing at 12 p.m., the STS-115 crew informed Mission Control that one of the crew members spotted a small object near the shuttle. The crew captured imagery of it and will downlink it to MCC for analysis. At about 12:46 p.m., MCC instructed the crew to power up the Atlantis’ robot arm so that its elbow camera can be used to survey the orbiter. Landing opportunities for Atlantis on Thursday begin with a potential 6:22 a.m. touchdown at the Kennedy Space Center, Fla. Atlantis’ mission has resumed the construction of the International Space Station. Atlantis delivered the P3/P4 integrated truss to the station on Sept. 11. The STS-115 and Expedition 13 crews used the shuttle and station robotic arms to attach the truss to the orbital outpost. Then STS-115 astronauts conducted three spacewalks in four days to prepare the truss and its solar arrays for operation. The weather forecast at Kennedy Space Center calls for better weather at the Shuttle Landing Facility on Thursday. Forecasters will continue to monitor the situation. The weather forecast for Wednesday had called for unacceptable thunderstorms and strong winds at the potential landing time.

CollectSpace.com [19-Sep] :: (via nasaspaceflight.com) In these yet-to-be-publicly-released photographs taken by the STS-115 crew and obtained from a source by collectSPACE.com, a piece of debris is seen near the orbiter Atlantis.

Atlantis Set to Return Home Today [21-Sep|01:44am EDT] :: The six STS-115 astronauts are scheduled to end their orbital construction mission today with a landing at 6:21 a.m. EDT at Kennedy Space Center, Fla. The crew will prepare for re-entry and landing this morning. The payload bay doors are scheduled to close at 2:44 a.m. Commander Brent Jett and Pilot Chris Ferguson are slated to fire the shuttle’s engines at 5:14 a.m. to begin the descent to Florida. If flight controllers decide to delay landing, a second opportunity is available today. It would begin with a de-orbit burn at 6:51 a.m. and end with a 7:57 a.m. landing. Forecasts call for acceptable landing weather in Florida. The STS-115 crew members have been in orbit since Sept. 9. They resumed the construction of the International Space Station with the delivery of the P3/P4 integrated truss segment. They conducted successful spacewalks primarily devoted to preparing the truss and its solar arrays for operation.

STS-115 Landing Chart for 21-Sep @ 06:21AM EDT [20-Sep|11:15pm PDT] :: P.FORTUNE {27VI57} conjunct SUN {28VI18} ~ Sabian Symbols :: Virgo 28° A bald-headed man in uniform completely dominates an assembly of men, diplomats, scientists, and industrialists + Virgo 29° A scholar has just succeeded in deciphering an archaic manuscript; it holds for him an idea for which he has long sought  •  MOON {16VI52} conjunct ASCENDANT {16VI31} with JUNO {17VI44}, VENUS {18VI49}, VULCAN {20VI37}, DRUJ {23VI43} & VESTA {23VI17} ~ Sabian Symbols :: Virgo 17° A vast display of cosmic forces is seen in the eruption of a volcano with dust clouds, flowing lava, earth rumblings + Virgo 18° Two giggling young girls are sitting facing each other, knees tightly touching, working a ouija board on their laps + Virgo 19° There is a colorful gallery on the warm summer day; in the clear blue water a swimming race nears its decision + Virgo 21° A large cheerful but bare room holds two teams of fresh young girls engaged in a laughing game of basketball + Virgo 24° A large book for children is open at a colored page; here Mary with her yellow curls leads an immaculate white lamb.

[21-Sep|01:27am PDT] :: P.FORTUNE + SUN precisely at Virgo 28°18'3" starting 06:22:39.53 AM to 06:22:39.60 AM (EDT, .fractions of seconds; at 06:22:39.61 AM P.FORTUNE at Virgo 28°18'4"). on 06:21AM chart, everything below horizon (including JPL) except SATURN, NASA, ENTERPRISE, ATLANTIS, DISCOVERY, COLUMBIA, EROS & TRUE NODE. SUN, MOON, MERCURY, VENUS, MARS, LILITH, JUNO, VESTA, DRUJ & P.FORTUNE in first house. NASA-ENTERPRISE close to MIDHEAVEN {15GE55}. as time progresses, they all rise above horizon. at 06:22:39.57 AM, MOON rises over chart's horizon entering 12th house. at 06:21AM EDT, NASA {05CN15} conjunct ENTERPRISE {28GE39}; ATLANTIS {02LE53} conjunct COLUMBIA {05LE14}; DISCOVERY {01VI32} conjunct ISIS-TRANSPLUTO {28LE01}; JPL {16SG20} conjunct IMUM COELI {15SG55} & AURORA {21SG11} near Galactic Center ~ Sabian Symbols :: Cancer 6° It is in the flush of spring, and innumerable wild or game birds are seen feathering their nests + Gemini 29° High in a tree that has given only the faintest evidence of returning spring, a mocking bird delivers its repertoire + Leo 3° A woman of middle years is bobbing her hair for the first time; a look of rebellion melts to surprised anticipation + Leo 6° A sweet old-fashioned belle and a pert and attractive little modern flapper, stand in mutual envy of each other + Virgo 2° A simple but impressively large white cross has been set up in splendid isolation on top of a commanding eminence + Leo 29° A mermaiden has climbed to the rocky shore of a bleak coast; she awaits the prince who will bring her immortality + Sagittarius 17° An Easter sunrise service is about to begin at the suggestion of dawn; darkness surrenders to the worshipers + Sagittarius 16° A peaceful scene is unfolded to view; a calm ocean, a single motionless ship, a few lazy soaring seagulls + Sagittarius 22° A perfect bit of the old world is found in the new; a Chinese laundry has its shutters up and is now itself.

C-BAND RADAR ACQUISITION OF ATLANTIS THROUGH MILA @ 03:09AM [21-Sep|03:00am PDT] :: The MILA Tracking station at KSC acquires Atlantis at about 13 minutes before landing and begins supplying controllers in Houston with voice, data and telemetry communications starting about one minute later. At 11 minutes before touchdown, the orbiter begins receiving navigation signals from the TACAN, the homing beacon and navigation signal at the Shuttle Landing Facility. As Atlantis intercepts the heading alignment circle, the first video should become available from the pilot's point-of-view video camera and the orbiter will begin following the curved approach path of the microwave scanning beam landing system. As Atlantis crosses directly overhead of the Shuttle Landing Facility and out over the Atlantic Ocean, it makes a gradual right turn toward a 7-mile final approach to Runway 33, a southeast to northwest approach.

[21-Sep|03:05am PDT] :: woke up around 6-pmish yesterday & finally realized it was near STS-115's wakeup call. so, trying not to fall back asleep watching Fairly OddParents, the Wish Fixers. in this eppy Cosmo & Wanda are human with long legs, no wings or crowns. Timmy has to remind them to walk through the door, not through walls. drinking coffee their eyes turn twizzly, Cosmo goes nuttier. finally get up at the end when human Cosmo trips past the screen saying something about isn't coffee wonderful. luckily, got me a fresh bag of beans. good joe. cspan2 live coverage currently. Atlantis doing s-turns & "spectacular lightning flashes below the orbiter".

AUXILIARY POWER UNITS [21-Sep|03:42am PDT] :: One auxiliary power unit is restarted before the deorbit thrusting period. The two remaining units are started after the deorbit thrusting maneuver and operate continuously through entry, landing and landing rollout to provide hydraulic pressure for the following: positioning of the orbiter aerosurfaces during the atmospheric flight portion of entry; deployment of the nose and main landing gear, main landing gear brakes and anti-skid; nose wheel steering; positioning of the three main engines after landing rollout; and maximum hydraulic pump operation reverification.

NASA Landing Blog [21-Sep|03:46am PDT] :: The recovery operations convey has arrived. This convoy consists of about 25 specifically designed vehicles or units and a team of about 150 trained personnel who assist the crew in leaving the orbiter, and who "safe" the orbiter, prepare it for towing and then tow the vehicle to the Orbiter Processing Facility. The team that recovers the orbiter is primarily composed of Kennedy Space Center personnel, whether the landing takes place at Kennedy, Edwards Air Force Base or elsewhere + The crew will depart the orbiter in about 45 minutes [@7:15AM EDT] + The crew returns to Houston on Friday, Sept. 22, where there will be a welcome home ceremony.

NASA Landing Blog [21-Sep|07:45am EDT] :: Houston Flight has signed off the communications network, saying they were handing "the keys" over to Kennedy for the next flight. Atlantis' next mission, STS-117, will be no earlier than Feb. 22, 2007, when it will return to the International Space Station. [next up is Discovery STS-116 with NET 14-Dec launch, which may get moved up a week to avoid Christmas clash (ok, so that's what NET means, eh?)].

[21-Sep|04:59am PDT] :: astronauts have left the building, shaking hands about to do the crew walkabout.

[21-Sep|05:30am PDT] :: not too sure what to say after a flight like that ... Atlantis was a terrific ship ... no problems at all, she performed well ... special thanks [to KSC folks] for preparing Atlantis ... a pleasure to fly her ... great to be home. —Brent Jett. nasa landing coverage ends; crew leaves to meet family. c-span2 covering Mike @ 08:30AM EDT. Atlantis tow to hangar happens 4½ hours post landing, should be safely tucked in by 1ish. NASA Landing blog deactivated @ 8:22 a.m. EDT.

Mission Accomplished! [21-Sep] :: NASA officials and mission managers held a post-landing briefing at Kennedy Space Center in Florida following the successful landing of Space Shuttle Atlantis. NASA Administrator Michael Griffin said, "The teams did a wonderful job." He added, "You've seen a great effort on NASA's part by a truly great team of people. We are rebuilding the type of momentum that we've had in the past and we'll need to continue." + Later, at no earlier than 11:30 a.m. the STS-115 crew will hold a news conference to discuss the mission.

[21-Sep|06:21am PDT] :: while NASA admits they're litterbugs they don't think they need a Keep Space Beautiful [+] campaign just yet. + i'm taking a nap & going for celebratory tacos around noonish (or elevenish, i'm hungry).