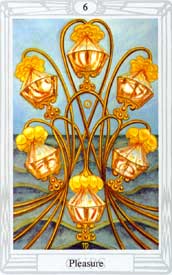 This card shows the influence of the number Six, Tiphareth, in the suit of Water. This influence is fortified by that of the Sun, who also represents the Six. The whole image is that of the influence of the Sun on Water. His fierce, but balanced power operates that type of putrefaction—he is in the Sign of Scorpio—which is the basis of all fertility, all life. The lotus stems are grouped in an elaborate dancing movement. From their blossoms water gushes into the Cups, but they are not yet full to overflowing, as they are in the corresponding card below; the Nine. Pleasure, in the title of this card, must be understood in its highest sense: it implies well-being, harmony of natural forces without effort or strain, ease, satisfaction. Foreign to the idea of the card is the gratification of natural or artificial desires. Yet it does represent emphatically the fulfilment of the sexual Will, as shown by the ruling Sephira, planet, element, and sign.

In the Yi King, Sol in Scorpio is represented by the 20th Hexagram, Kwan [THE HERON], which is also "Big Earth", being the Earth Trigram with doubled lines. Kwan means "manifesting", but also "contemplating". The Kwan refers directly to an High Priest, ceremonially purified, about to present his offerings. The idea of Pleasure-Putrefaction as a Sacrament is therefore implicit in this Hexagram as in this card; while the comments on the separate lines by the Duke of Chau indicate the analytical value of this Eucharist. It is one of the master-keys to the Gate of Initiation. To realize and to enjoy this fully it is necessary to know, to understand, and to experience, the Secret of the Ninth Degree of the O.T.O.

Last year I was chosen to succeed the venerable K-Z — who had it in his mind to die, that is, to join Them in Venus, as one of the Seven Heirs of Atlantis, and I have been appointed to declare, so far as may found possible, the truth about that mysterious lost land. Of course, no more than one seventh of the wisdom is ever confided to one of the Seven, and the Seven meet in council but once in every thirty-three years. But its preservation is guaranteed by the interlocked systems of "dreaming true" and of "preparation of the antinomy." The former almost explains itself; the latter is almost inconceivable to normal man. Its essence is to train a man to be anything by training him to be its opposite. At the end of anything, think they, it turns out to be its opposite, and that opposite is thus mastered without having been soiled by the labours of the student, and without the false impressions of early learning being left upon the mind. I myself, for example, had unknowingly been trained to record these observations by the life of a butterfly. All my impressions came clear on the soft wax of my brain; I had never worried because the scratch on the wax in no way resembled the sound it represented. In other words, I observed perfectly because I never knew that I was observing. So, if you pay sufficient attention to your heart, you will make it palpitate. I accordingly proceed to a description of the country. —Liber LI: The Lost Continent

But an odd thing happens: once this transition is accomplished, it turns out that henceforth this reality, previously internal and hidden, is revealed to be enveloping, surrounding, containing what was first of all external and visible, since by means of interiorization, one has departed from that external reality. Henceforth, it is spiritual reality that envelops, surrounds, contains the reality called material. That is why spiritual reality is not "in the where." It is the "where" that is in it. Or, rather, it is itself the "where" of all things; it is, therefore, not itself in a place, it does not fall under the question "where?"—the category ubi referring to a place in sensory space. Its place (its abad) in relation to this is Na-koja (No-where), because its ubi in relation to what is in sensory space is an ubique (everywhere). When we have understood this, we have perhaps understood what is essential to follow the topography of visionary experiences, to distinguish their meaning (that is, the signification and the direction simultaneously) and also to distinguish something fundamental, namely, what differentiates the visionary perceptions of our spiritual individuals (Sohravardi and many others) with regard to everything that our modern vocabulary subsumes under the pejorative sense of creations, imaginings, even utopian madness. —Mundus Imaginalis, or the Imaginary and the Imaginal

AQ-1293 = KNOWLEDGE OF THE SUPREME SECRET OF THE SOVEREIGN SANCTUARY OF THE GNOSIS.

AQ-634 = SOVEREIGN SANCTUARY OF THE GNOSIS = YOU ARE BREATHING IN THIS WHITE WAVE (Silence, Delerium with Sarah McLachlan).

AQ 535 = FULFILMENT OF THE SEXUAL WILL (Six of Cups ~ Pleasure) = ART LABOE'S DEDICATED TO YOU VOL. 8 = BROTHERHOOD OF THE SEVEN RAYS = CORPUS CAVERNOSUM URETHRAE = FBI SPECIAL AGENT IN SAN FRANCISCO (Omowale Adewale) = LIVIN' IN A WORLD (THEY DIDN'T MAKE) (Rhythm Nation 1814, Janet Jackson) = LOVE IS THE MAGICAL CRUCIFIXION = PREY OUTNUMBERS PREDATORS = THE DARK SECRET OF HENDRIK SCHON 2004 = THE FUNNIEST JOKE IN THE WORLD = THE QUINTESSENCE OF LAZINESS (The Weblog).