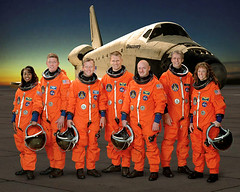 The decision was announced after a lengthy Flight Readiness Review, a traditional meeting in which top NASA managers and engineers set launch dates, determine whether the shuttle's complex array of equipment, support systems and procedures are ready for flight and assess any risks associated with the mission. 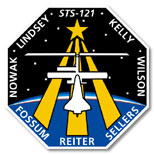 "We had two full days of an intensive Flight Readiness Review," said Administrator Michael Griffin. "It was spirited and one of the most open, yet non-adversarial meetings I've seen since returning to NASA."

Commander Steve Lindsey and his six-crewmates are scheduled to lift off at 3:48 p.m. EDT to begin a 12-day mission, designated STS-121. Discovery's crew will test new hardware and techniques to improve shuttle safety, as well as deliver supplies, make repairs and bring a third crew member to the station.

"We were really careful to evaluate everything as thoroughly as we could," said Associate Administrator for Space Operations Bill Gerstenmaier, who chaired the Flight Readiness Review. "But the review of the ice/frost ramp was one of the most vigorously discussed."

The ice/frost ramps are structures made of insulation foam that cover 34 brackets on the outside of the shuttle's external fuel tank. The ramps have been cited as a potential source of foam loss, which could cause damage to the shuttle. The Flight Readiness Review board decided the current design does not pose sufficient risk to delay the upcoming mission while design improvements for later flights are under way.

Aboard the station, Expedition 13 Commander Pavel Vinogradov, a Russian Federal Space Agency cosmonaut, and Flight Engineer and NASA Station Science Officer Jeff Williams will greet Discovery and its crew. Vinogradov and Williams began their six-month mission on the station March 31.