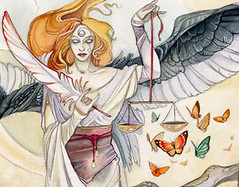 • Lady Justice  • 269 Justitia  • Images of the Goddess of Justice •
• Justice is a Woman With a Sword  • Federick Douglass and Lady Justice •
• Iconology of the Justice Cards  • gematria: hyper-symbiosis •
• Blind Justice, by Sano  • The Casting of Lots •

think this is the first time i've ever done a chart for 911. right now i'm looking at:

don't think i can find anyone with such a unique tight alignment PLUS a pentagram. also, ACHILLES conjunct 911's SUN in Virgo & on Cheney's chart it's in the same house as his POF-[N] that conjuncts WASHINGTONIA, MAGNANIMITY, BABYLON & #911-AGAMEMNON (also looking closely at those Cheney hypotheticals — Pickering (Plu), Leverrier (Nep), Adams (Neptune) & Lowell (Pluto) — involved in the discovery of Neptune & Pluto).

Heidegger's [+][+] Dasein & Lichtung help me figure out what shows up when i'm around someone & identify their intention, motivation & whatnot. what shows up that wouldn't show up if X wasn't present. since learning about Cheney's chart i've discovered more pentagrams & hexagrams, worked out some analytical problems, learned about a new 827 fast runner, &c. precisely the type of clearing new moon types create. if you want the hyper-symbiosis of this chart it's between Mercury at the ASC & QB1 at the DSC. i couldn't stand at 911's Ascendant and stare down something like QB1. i think Cheney can. but ... get the sense it'd be easier at Cancer than Libra coz Libra 14°, i think (right smackdab in the middle there), is where the Sword of Gebuhra is located — it's the only place where it could be on this chart. MERCURY doesn't make this easy.

my sun in gemini is at the Midheaven with Mercury & lots of fire (vesta, vulcan, blech). right after 911 i created my Goëtia deck & went to my friend's house near the ocean. an astrologer guy was renting a room there & i showed him my horoscope. he looked at it a moment & said: i bet you have a hard time falling asleep. did the dentist ever give you mercury when you were a kid? never stops rolling, dividing, recombining. Goo Goo Gaga is mercury overloaded. mercury symbolizes the mind, thoughts, language, words. in astrology it rules communication, email, the internet, phones, networks, rhetoric, debate, discourse. word is, back up your hard drive when mercury goes retrograde & expect delays & breakdowns for all types of communications. 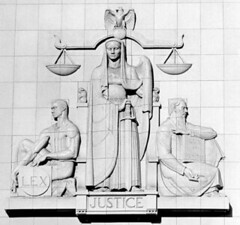 my father's a Libra & he believes in being in harmony with life — classic Libra, the traditional House of Marriage (don't laugh). Libras strive for balance, harmony, justice, relationships. depictions of Justice have not always shown her blind. on the 911 chart Justice is not only not blind, but she is the target of the first airplane. she is the "target" because she holds a sword. there are two doubles here: the scales of Libra & Gemini's ruling planet, Mercury. my POF is {27TA22} & my 911 challenge is POSEIDON {13LI12Rx}, REQUIEM {13LI30}, 1998 QJ1 {13LI52Rx} & QUAOAR {15LI07Rx} at 911's Ascendant, opposite OPHELIA {13AR04}, SEKHMET {13AR37}, NEPHTHYS {14AR45} & 2003CO1. Sabian symbol for QJ1: Aquarius 11° An artist has withdrawn from friends and all accustomed haunts to be alone with a new inspiration just forming; QUAOAR: Sagittarius 11° An ever-burning lamp throws light upon an archaic idol; & CO1: Virgo 5° A man lies dreaming in the shade of an Irish countryside; his dreams bring to him the playful little people. (check your horoscope between Libra 13°-15° & Aries 12°-13°).

saw A Few Good Men on a flight back from Ohio with most of my family after my brother's wedding. sitting dead-center in the back of the plane. movie screen a mile away. despite numerous distractions, i was riveted:

Col. Jessep: Son, we live in a world that has walls, and those walls have to be guarded by men with guns. Whose gonna do it? You? You, Lt. Weinburg? I have a greater responsibility than you could possibly fathom. You weep for Santiago, and you curse the marines. You have that luxury. You have the luxury of not knowing what I know. That Santiago's death, while tragic, probably saved lives. And my existence, while grotesque and incomprehensible to you, saves lives. You don't want the truth because deep down in places you don't talk about at parties, you want me on that wall, you need me on that wall. We use words like honor, code, loyalty. We use these words as the backbone of a life spent defending something. You use them as a punchline. I have neither the time nor the inclination to explain myself to a man who rises and sleeps under the blanket of the very freedom that I provide, and then questions the manner in which I provide it. I would rather you just said thank you, and went on your way, Otherwise, I suggest you pick up a weapon, and stand a post. Either way, I don't give a damn what you think you are entitled to. [+]

i think Colonel Jessep's wall disappeared after 911 & the new wall is that MERCURY-QB1 line. however, his speech seems to be the predominant tone — is it the correct one? how do we identify when someone is speaking from that MERCURY-QB1 line? new moon types set the stage, the tone, the direction for each cycle. in this case, they're the ones that draw the line in the sand. a new creative impulse runs through all the lunation phases like runners with batons in a relay race. anybody at any time can drop that baton. wondering whether Cheney successfully passed that baton to his first quarter moon (Bush). good reminder here: 911 Ascendant is conjunct Mercury. one of the most serious problems in NYC involved the failure to communicate effectively & gain situational awareness. Flight #93 illustrates another type of communcation emerging.

while that continues mashing my brain matter, don't think i could have seen that 911 pentagram back in 2001. maybe because it's "horizontal" & 220 & 827 are "vertical" (but honestly? don't think i was emotionally ready to see it). checked ASTRO-FAQ for more info on red, blue & green aspect colors:

Do the aspect colours have a particular meaning or are they arbitrary?

The colours of the aspects show which kind of aspect group they belong to. Red aspects belong to the group of "analytical" or "disharmonious" aspects (the main ones are Square and Opposition), blue ones are considered "synthetic" or "harmonious" (Sextile and Trine), and green is used for the minor aspects of Quinkunx and Semisextile. For more information on the aspects used in our charts, please read the respective chapter in our Introduction to Astrology. [+] 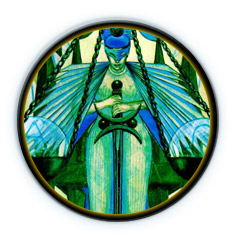