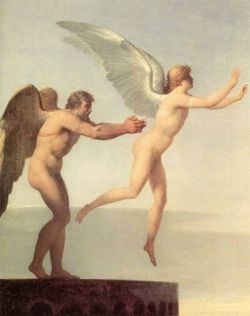 Meanwhile Daedalus, hating Crete, and his long exile, and filled with a desire to stand on his native soil, was imprisoned by the waves. ‘He may thwart our escape by land or sea’ he said ‘but the sky is surely open to us: we will go that way: Minos rules everything but he does not rule the heavens’. So saying he applied his thought to new invention and altered the natural order of things. He laid down lines of feathers, beginning with the smallest, following the shorter with longer ones, so that you might think they had grown like that, on a slant. In that way, long ago, the rustic pan-pipes were graduated, with lengthening reeds. Then he fastened them together with thread at the middle, and bees’-wax at the base, and, when he had arranged them, he flexed each one into a gentle curve, so that they imitated real bird’s wings. His son, Icarus, stood next to him, and, not realising that he was handling things that would endanger him, caught laughingly at the down that blew in the passing breeze, and softened the yellow bees’-wax with his thumb, and, in his play, hindered his father’s marvellous work.

When he had put the last touches to what he had begun, the artificer balanced his own body between the two wings and hovered in the moving air. He instructed the boy as well, saying ‘Let me warn you, Icarus, to take the middle way, in case the moisture weighs down your wings, if you fly too low, or if you go too high, the sun scorches them. Travel between the extremes. And I order you not to aim towards Bootes, the Herdsman, or Helice, the Great Bear, or towards the drawn sword of Orion: take the course I show you!’ At the same time as he laid down the rules of flight, he fitted the newly created wings on the boy’s shoulders. While he worked and issued his warnings the ageing man’s cheeks were wet with tears: the father’s hands trembled. [+]
ICARUS: Escapes that are careless of consequences; desire to "get outta' here;" the fast break impulse; attraction to speed, danger or risk; desire to get away from restrictions (of aspecting points).

DAEDALUS: Architecture; design; cleverness; "the artful dodger;" escape of consequences that then fall on others; jealousy; instances of feeling like an honored slave; creative; affinity with metals. [+]
Work is the basis of social existence. Every sociological theory emphasizes this fact. The problem, however, is not whether this is so, but whether work, intrinsically, is in conflict with the bio-[244]logical needs of the masses or in harmony with them. The economic theory of Marx has demonstrated the fact that all economic values owe their existence to living working power and not to dead material.

As the only force which produces values, human working power deserves special interest and the greatest care. In a society governed by a market economy—which is not an economy of use—such careful attention to human working power is out of the question. This working power is bought by the owner of the means of production (state or capitalist) and consumed like any other commodity. The wages which the worker receives correspond approximately to the minimum necessary for the reproduction of his working power. Profit economy is not interested in being sparing in its use of the working power, for the increasing mechanization and rationalization of work liberate so much working power that whatever is used up is readily replaced.

The Soviet Union eliminated private profit economy, but not that of the state. Originally, it was to change the capitalist "rationalization" of work into a socialist rationalization. It liberated the productive powers and generally shortened working hours; thus, it succeeded in getting through the severe economic crisis of 1929 to 1932 without unemployment. There is no doubt that the Soviet Union, with its measures of rationalization, which in the beginning were partly socialist, succeeded in satisfying the economic needs of society. The basic problem of a true democracy, of a work democracy, however, goes beyond this: it is the problem of whether work is really so changed that from a burdensome duty it can become the pleasurable gratification of a need.
. . . . . .
The pleasure in work of an "independently" working academician cannot be made the yardstick of work in general. Seen in social terms, work in the 20th century is governed entirely by duty and the necessity of making a living. The work done by hundreds of millions of workers in the world provides neither pleasure nor biological gratification. It is of the type of compulsive work and at variance with the biological need for pleasure. It is done out of duty or conscience, in order not to starve, and is, as a rule, done for others. The worker has no interest in the product of his work, consequently the work is devoid of pleasure and is a burden. Any work based on compulsion instead of pleasure is not only uneconomical biologically, but also relatively unproductive economically.
. . . . . .
It is a primary task of work democracy to harmonize the conditions and forms of work with the need of and enjoyment in work, in other words, to eliminate the contradiction between joy in life on the one hand and work on the other [...] Enjoyment in work is an essential and indispensable element in the alteration of human structure from work slave to master of production. If people again have an immediate relationship to the product of their work they will also joyfully take the responsibility for the work.

One might point to the Soviet Union and say: "You work democrats are Utopians and daydreamers even though you claim to look at reality unsentimentally. Where, in the workers' paradise of the Soviet Union, is 'elimination of the division of labor,' or enjoyment in work? Or the elimination of the wage system or of market economy? You can see from the results of the workers' revolution how impossible and illusory are Epicurean work concepts!"

The answer to these arguments is the following: True, the mysticism of the masses is today, in spite of the progress in natural science, stronger than before. However, if a striven-for goal—in this case, the rationality of the masses—is not attained, that is no argument against the possibility of attaining it. The basic question remains whether the goal of joyful work is correct or not. If so, if it is what everybody longs for, then we must ask what obstacles are in the path of this rational goal. This is the same in [247] the realm of technic as in that of science. If Mount Everest has not been climbed to date, that does not mean that it cannot be climbed at all. What matters is the top 800 meters.

It is at this point that the sharp clash between work democracy and politics reveals itself clearly and simply: Our newspapers are full of political debates which do not take into consideration one single problem of the work process. Imagine that a work-democratic community would close the columns of its newspapers to irrationalism and would give them over to the discussion of the conditions of joyful work. The working masses would come forth with suggestions so numerous that they would make politiciandom impossible.
. . . . . .
In the first years of the Soviet economy there were the beginnings of work democracy. For example, an allround preparation of the growing generation for a professional life replaced the one-sided professional training; this was an attempt to counteract the damages of the division of labor. The contrast between "mental" and "manual" work diminished. Youth obtained such an all-round preparation for their future professional life that every member of society could assume any place in the work process. Workers from different kinds of factories were exchanged. When well-trained workers assumed a place in the management of the factory, they were sent back to the machines after a while so that they would not lose contact with the work and would not develop into administrative bureaucrats.

Self-government in the factories found its expression in the [248] institution of the so-called "directorate of three"; every factory was administered by elected representatives of the workers. In this manner, all the workers of a factory participated directly in the administration. There were special "meetings on production." This and many other facts show that an attempt was made to re-establish the unity of joy in work and achievement in work. Here, the opponent of work democracy might point out triumphantly that most of these achievements did not last, that, for example, the production meetings gradually underwent a formalistic degeneration or were given up altogether. The answer is the following: Did not the Wright brothers make flying possible, even though the attempts of Daedalus and Icarus in antiquity, and the attempts of Leonardo da Vinci in the middle ages, failed? The first attempts at a work-democratic management of factories failed because the change in factory management did not go hand in hand with an alteration of human structure. This can be a lesson for doing things better next time. [+]
Sleep dogs in safety: Sirius will watch over the garden with his beloved Erigone. [+]