• asteroid list
• vision for space: hexagram one
• The Cheney Pentagram 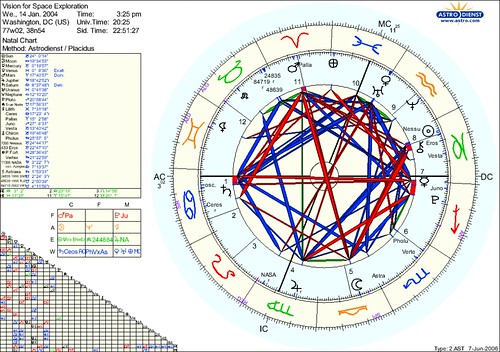 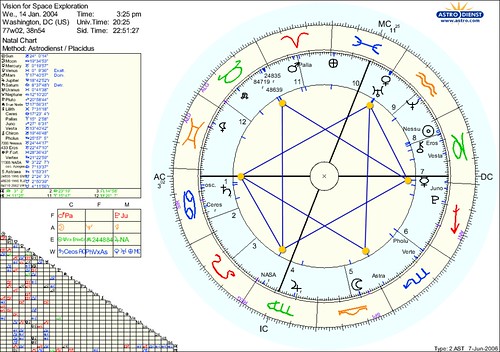 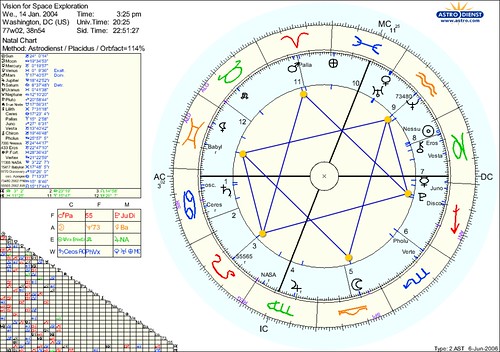 i call this one the NASA hexagram because it has asteroid NASA & call the other one the Vision hexagram. however, i could be misnaming these charts because i think this one may illustrate the Vision better. the first hexagram was easy to see because i already plugged in BABYLON & the only missing point was AW197 {15LE17Rx}. this hexagram was missing two points (& harder to find): SM55-TL8-VR128-UY283 {02TA24Rx} & ASTRAEA {01SC54}. that centaur combo is pretty impressive, more about them later.

not sure about that SATURN-DRUJ conjunction at the ASC; SATURN opp the sign it rules (Detr. = Detriment) means it's got a lesser effect. main keyword for SATURN is restriction/contraction — bear to JUPITER's bull. ICARUS {14AQ18} is another major concern: conjunct NEPTUNE {12AQ10}, 1999_OX3 {13AQ16}, DAMOCLES {13AQ56} & 2002_PN34 {15AQ09} & Aquarius 15° gateway. Sabian symbol for OX3 's discovery degree is Aquarius 3° A deserter suddenly realizes the fallacy of his conduct. this is Icarus the moment he starts falling, Damocles the moment he sees that sword — perfectly describes NASA's awareness of how to deal with past problems & what they need to do to move forward. SATURN points to NASA's tremendous set of challenges involving budgets, changing paradigms & structures & a returning lunar focus ... a very careful approach. the fact this group isn't with asteroid NASA may point to how to interpret both charts because BUSCH {17VI25Rx} & WHITEHOUSE (1987 DW5) {08PI22} seem perfectly aligned with this hexagram. Part of Fortune plays a key element there.

BUSCH {17VI25Rx} conjunct ATLANTIS {15VI41Rx}, JUPITER {18VI43Rx} & WALDEMATH {19VI59}, which is great since someone setting up a new vision should be standing right next to JUPITER (expansion). standing next to the fourth space shuttle doesn't hurt either. BUSCH {17VI25Rx} opp ARTEMIS {18PI06}; goddess Artemis associated with bears & the etymology of her name could mean "safe and sound". ARTEMIS is 249º28'46" from SATURN @ EON-25 Seeing the whole picture.

WHITEHOUSE {08PI22} conjunct APOLLO {11PI49} & MOON {19LI35} conjunct APOLLON {23LI51}; Janis Page describes APOLLON Like druzy quartz or a crystal cluster, many shining facets and points radiating out in all directions (druzy means "a fine layer of miniature crystals filling a cavity or coating a matrix") — could be describing that SAT-DRUJ combo:

Apollon is the Light shining thru the prism, and also is the prism that unfolds the full-spectrum rainbow out of that pure light, breaking a pure energy stream into differentiated multiplicity in manifestation so that it can be experienced more fully. This is a different flavor of manifestation than the cornucopia of Cupido. This is the finely cut gemstone, a diamond cut to show all its potential radiant brilliance from all angles. [+]
APOLLON: Multiple interests and developments; many irons in the fire; more than one; combining; career opportunities; travel or study associates; long distance/cosmopolitan connections; divided interests. [+]

Last Quarter Moon occurred 14-Jan-2004 @ 11:46 p.m. EST. MOON {19LI34} 265º34'39" from SUN {24CP0} @ EON-27 Transformation, Conscious Agent, Cosmic Empowerment, Harmonizing. SUN ABOVE—MOON BELOW HORIZON: Primarily inward focus revealing an individual form to a racial-social purpose or a collective ideal; Examples: Napoleon I, Nietzsche, Walt Whitman, Einstein, Henry Ford, Hitler, Johnny Carson. DISSEMINATING MOON TYPE (Soli-Lunar Arc: 225° - 270°): Born from eighteen and one-half to twenty-two days after a New Moon or three and one-half days to seven days after the Full Moon. Your typical personal characteristics are: the ability to demonstrate to others what you have learned or envisioned, to disseminate ideas, to participate in social-religious movements and to fight for what you see as the right, to be a crusader and a disciple; negatively, to become lost in social or moral fights, to develop mental confusion or fanaticism. Examples of the type: Thomas Jefferson, Disraeli, Teddy Roosevelt, Hitler, Bismarck, Richard Wagner. POF {28PI37} above horizon square MERCURY {00CP20} (conflict).