Astaroth appears as an ugly angel riding a dragon and holding a viper in his left hand. It is thought that this powerful grand-duke presides over 40 legions, and possibly over the East and is treasurer of hell. The Sidonians and Phlistines worshipped him in the past. Wierus mentions that he knows of past and future events, secret things, liberal arts, and the story of creation and the fall of the angels. He also believes he received an unjust punishment. Some magicians say he procures the goodwill of great lords and can be summoned on Wednesday. He is said to emit a powerful fetid odor, and to endure that, the magician should hold a silver magical ring that prevents odors under his nose. Astaroth is cited as one of the seven princes of hell who visited Faust, appearing as a serpent with a colored tail, two small feet, a chestnut neck, and spines similar to a hedgehog that can grow up to a finger's length. As his feminine counterpart, Astarte, he is portrayed with a heifer's head.

That Semiramis, under the name of Astarte, was worshipped not only as an incarnation of the Spirit of God, but as the mother of mankind, we have very clear and satisfactory evidence. There is no doubt that "the Syrian goddess" was Astarte (LAYARD'S Nineveh and its Remains, vol. ii. p. 456). Now, the Assyrian goddess, or Astarte, is identified with Semiramis by Athenagoras (Legatio, vol. ii. p. 179), and by Lucian (De Dea Syria, vol iii. p. 382). These testimonies in regard to Astarte, or the Syrian goddess, being, in one aspect, Semiramis, are quite decisive. 1. The name Astarte, as applied to her, has reference to her as being Rhea or Cybele, the tower-bearing goddess, the first, as Ovid says (Opera, vol. iii., Fasti, lib. iv. ll. 219, 220), that "made (towers) in cities;" for we find from Layard, at the page above referred to, that in the Syrian temple of Hierapolis, "she [Dea Syria or Astarte] was represented standing on a lion crowned with towers." Now, no name could more exactly picture forth the character of Semiramis, as queen of Babylon, than the name of "Asht-tart," for that just means "The woman that made towers." It is admitted on all hands that the last syllable "tart" comes from the Hebrew verb "Tr." It has been always taken for granted, however, that "Tr" signifies only "to go round." But we have evidence that, in nouns derived from it, it also signifies "to be round," "to surround," or "encompass." In the masculine, we find "Tor" used for "a border or row of jewels round the head" (see PARKHURST, sub voce No. ii., and also GESENIUS). And in the feminine, as given in Hesychius (Lexicon, p. 925), we find the meaning much more decisively brought out: Turis ho peribolos tou teichous. Turis is just the Greek form of Turit, the final t, according to the genius of the Greek language, being converted into s. Ash-turit, then, which is obviously the same as the Hebrew "Ashtoreth," is just "The woman that made the encompassing wall." Considering how commonly the glory of that achievement, as regards Babylon, was given to Semiramis, not only by Ovid (Opera Metam., lib. iv. fab. 4. 1. 58, vol. ii. p. 177), but by Justin, Dionysius, Afer, and others, both the name and mural crown on the head of that goddess were surely very appropriate. In confirmation of this interpretation of the meaning of the name Astarte, I may adduce an epithet applied to the Greek Diana, who at Ephesus bore a turreted crown on her head, and was identified with Semiramis, which is not a little striking. It is contained in the following extract from Livy (lib. xliv. cap. 44, vol. vi. pp. 57, 58): "When the news of the battle [near Pydna] reached Amphipolis, the matrons ran together to the temple of Diana, whom they style Tauropolos, to implore her aid." Tauropolos, from Tor, "a tower," or "surrounding fortification," and Pol, "to made," plainly means the "tower-maker," or "maker of surrounding fortifications;" and to her as the goddess of fortifications, they would naturally apply when they dreaded an attack upon their city. [+]
The Protestant mythographer Alexander Hislop elevated Semiramis to a cosmic feature; in his book The Two Babylons, Hislop attempts to demonstrate that Semiramis and Nimrod, briefly mentioned in the Book of Genesis as a "mighty hunter before the LORD," are identical to Isis and Osiris, or Astarte and Tammuz. Semiramis goes on to become the Blessed Virgin Mary according to Hislop's version of the tale; most of the world's mythical figures are retellings of the tale of Semiramis and Nimrod. This mythography is supposed to demonstrate that Roman Catholicism is in fact paganism. Few accept Hislop's fanciful mythography today, but his version of the story continues to be recirculated in Jack Chick's tracts and comic books. [+] 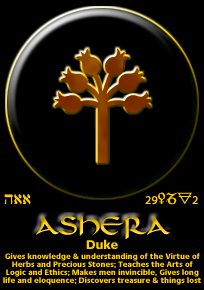 And the sign of the rising waters on earth was accompanied by a sign in heaven. For in the early days of Egyptian history, some three or four thousand years before the beginning of our era, the splendid star of Sirius, the brightest of all the fixed stars, appeared at dawn in the east just before sunrise about the time of the summer solstice, when the Nile begins to rise. The Egyptians called it Sothis, and regarded it as the star of Isis, just as the Babylonians deemed the planet Venus the star of Astarte. To both peoples apparently the brilliant luminary in the morning sky seemed the goddess of life and love come to mourn her departed lover or spouse and to wake him from the dead. Hence the rising of Sirius marked the beginning of the sacred Egyptian year, and was regularly celebrated by a festival which did not shift with the shifting official year. [+]
1370 ASHTORETH [20° Cancer] AHMANITE I (Word Theme): Ashtoreth-Astarte, the Canaanite Goddess who was the personification of sexual passion and vigor. Also a war goddess and called "She who conceives but does not bear". Ruled over irrigation canals, called Mary in Egyptian. The Canaanite name for Isis-Demeter-Mary, the bride of Osiris-Yeshu and mother of Anath-Nephthys-Proserpine. Sons Amen Ishrael as an organization that appreciates the mystery of Astarte-Easter, associated her with Mary Magdalene. Interest, mystery, sexual attraction. [+]