pain at the limit

saw The Forgotten when it was first released. saw it again early Friday morning — NSA agents got my attention this time. Telly Paretta loses her 9-year-old son, Sam, in a plane crash. everything about Sam — every memento & artifact (including her marriage) — is eventually erased. but Telly's memory persists; she remembers she has a son. her psychiatrist tries to convice her it is only an illusion, but unfortunately he knows about "the experiment". giving the plot away: alien scientists are exploring the connection between parent & child — it is like "an invisible tissue", a connection that can be destroyed in everyone but Telly. an alien tells Telly, "There would be no suffering at all, if only you would forget him". however, even when her first memory of Sam being born is erased Telly remembers that life was once growing inside her: I had life inside me. I had life. I have a child. I have a son. I have a son, and his name is Sam, you son of a bitch. Telly has the capacity to not only remember her son, survive this experiement & re-harmonize reality, but she is perhaps, in the end, the only person who actually remembers the experiment.

read Karen Signell's Wisdom of the Heart several years ago, which got me reading a lot of Jung, especially Memories, Dreams, Reflections. i was intrigued by psychoanaylsis, transference & Jung's exploration of alchemy & the occult. finally re-explored Transference (by I cite) googling transference+overinvestment & popping Juan-David Nasio's The Book of Love and Pain: The Thinking at the Limit with Freud and Lacan — first chapter (pdf). it's an excellent example of Chiron, the wounded healer. expanding ideas in the Drake Well Chart by explaining the wound, the healer & the healing process. Nasio's awareness that "there is pain only against the background of love" may explain why certain types of wounds are so challenging:

that's from Nasio's first chapter. Clémence was Nasio's client for several years when she finally becomes pregnant after struggling with infertility. unfortunately, the baby dies three days later. Nasio characterizes psychic pain as a "sudden and unexpected separation from an object with which we have had an intimate bond ["brutal amputation from a love-object"]. The bond has been so intricate that it has constituted our very selves [regulating the harmony of our psyche]. Therefore the loss of the object threatens the self, disrupts the rhythm of life and requires the painful work of mourning and self-reconstruction".

"Here is what I take to be significant. Pain is not due to a detachment but to an overinvestment" (LP, 119). It is an overinvestment of an object "within," because it is no longer without. This would be Nasio's "original contribution," that the pain of mourning is not the pain of separation but the pain of bond, that the pain is not that of an absence, but of an excessive presence. Therefore, pain is the "affect that manifests the exhaustion of an ego completely occupied with desperately cherishing the image of the loved one who has been lost" (LP, 22). The true cause of this pain is not the loss of the loved person, but the all-consuming maintenance of his or her image, indeed, our complex fantasy of the person. One needs to recognize in psychical pain a twofold dimension in the sense that the ego reacts to the trauma of the loss in two ways: on the one hand, there is what Nasio calls a "disinvestment," an emptying out of energy brought about by the loss of the other; on the other hand, there is an "overinvestment," a sort of polarization of psychic energy on a single psychical image, that precisely of the lost other. Both events, the sudden emptying out and the extreme concentration, are what is painful. The work required is to re-harmonize the unbalance, or split, between the two phenomena. As Nasio explains, "Mourning is nothing other than a very slow redistribution of the psychical energy which was, until then, concentrated on a single dominant representation which was foreign to the ego" (LP, 23). [+]

for me, the gegenschein symbolizes what gets "engraved in the depths of the unconscious":

In addition, Nasio addresses the psychical implications of corporeal pain, exploring in a bold manner the psychical role in the activation of corporeal pain. The author discusses, in this respect, the three moments of corporeal pain: the wound, the trauma, and the reaction treating of the rapid transformation of the pain of the injury to a mental representation of that very injury. Nasio emphasizes that the memory of this representation of corporeal pain is "engraved in the depths of the unconscious," an unconscious memory that is destined to return transfigured as a psychosomatic lesion. It is precisely this transformation from the corporeal to the psychical that Nasio elaborates, noting that the unconscious pain will return and "the subject will experience an inexplicable pain that is without discernable organic cause. He or she will suffer without knowing that the present pain is the active memory of a past pain" (LP, 57). [+]

two more synchronicities with The Book of Love and Pain. the trailer for Oliver Stone's World Trade Center, which i first saw several hours ago, & De Rerum Natura by Lucretius (see: Cycle #23).

i've heard of people surviving recent traumatic events (9/11, Katrina, Atlanta court shooting) where the pain has not dissipated. the pain & grief are as fresh for them today as it was a year, two years, three years ... ago. Nasio talks about pain itself being an "extreme affect" & that "pain is the last line of defense against madness" bordering on senselessness, resisting symbolization — a "pain made of stone". it doesn't make sense for Hollywood not to film stories about 9/11 since, in a way, it is our primary source of bardic storytelling. the National Trust has placed the WTC Staircase on its list of America's 11 Most Endangered Historic Places:

The Vesey Street Staircase, the only surviving above-ground remnant of the original World Trade Center, is a vivid and haunting reminder of the September 11, 2001 terrorist attacks. The staircase played a significant role in saving the lives of hundreds of individuals who used it as a means of escape from their offices in the doomed Twin Towers. As a result, it has been dubbed the "Survivors' Staircase." Remarkably, the staircase survived both the collapse of the Twin Towers and subsequent recovery and cleanup efforts, but it is now threatened with destruction because it occupies part of the site of a new tower being developed by Silverstein Properties. Equally threatening to its survival is the cumulative impact of vibrations from numerous other construction projects taking place on the World Trade Center site. [+]

Penn & Teller (Bullshit!) did a show about the problems rebuilding & memorializing Ground Zero. i remember the firestorm when Maya Ying Lin's non-traditional design for the Vietnam Veterans Memorial was first announced. i remember years later walking in the dark wondering where it was when our Midnight Tour of Washington D.C. bus driver took us there to see it. all of sudden there's an edge & as i kept walking & looking until there was ... The Wall. it's possible that the Freedom Tower will gain the same type of acceptance — but i don't think so. Penn's idea of two gigantic slabs of bacon is way better. decided to investigate this from Wikipedia's WTC article:

In 1966, construction of the World Trade Center began with a groundbreaking that razed 13 square blocks of low rise buildings, some of which predated the US Civil War. [+]

& learned hurricanes come in many flavors:

The construction of the World Trade Center towers began with the destruction of a community, a community that the rich rulers of the city of New York, such as David Rockefeller and Robert Moses, considered a blight to be obliterated. It was a program of forced eviction and relocation that is not dissimilar to what is going on at the behest of American corporations in the Third World every day. The New York City Port Authority was used as the muscle to transform lower Manhattan from a community of people to a blinding canyon of corporate might. For an excellent documentation of the vicious history behind the construction of the WTC complex, I highly recommend The Destruction of Lower Manhattan by Danny Lyon. [+] 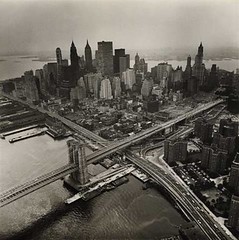 The pictures presented here were all made on the west side of Lower Manhattan, on or near the site of the WTC. They are presented here out of love for the city. They are also presented out of respect for the practice of photography, and the warning that now especially, in these perilous times, photographers must exhibit integrity in the use and control of their work. [+]

i graduated from high school in 1976 during America's Bi-Centennial. in 1967, buildings from our Civil War era were razed to build another bicentennial building. in 1977, the first year of America's Tri-Centennial, comet Chiron was discovered. whatever is built at Ground Zero represents our tricentennial. prior to reading The Book of Love and Pain excerpt, read s0metim3s' Impietas, virtù & Lucretius' clinamen:

Some wandering notes. In Machiavelli and Us, but also elsewhere, Althusser combines Lucretius’s understandings of the clinamen, chance, repulsion and combination with that of Machiavelli’s argument that the Prince must ’seize fortuna by the hair at the right moment’, thereby realising (as Illuminati will put it) “all of its virtù-potenza“. [+]

Nasio uses Lacan's semblance, which i know nothing about but the translators point out is part of Nasio's innovation. He associates the term with Lucretius' simulacra in De Natura Rerum — the representation of an object carries its materiality.

... Nasio addresses semblance as a position the analyst adopts before the patient. It is a position from which the analyst prepares not to interpret or explain the patient's pain but indeed to take on the pain, to be taken by that pain, to be caught up in its visceral materiality. Such a position, which is, rather, a dynamic, cements the bond of the transference and offers the possibility that the therapeutic relation could restore the rhythm of the drives and reset the psychical metronome, as it were. [+]

Nasio realizes that the healer must be wounded by what wounds the patient: "I do not possess pain, it possesses me: I am pain". just as the analysand's emotions are transferred to the analyst (Jupiter in Cancer), the wound must also be transferred — because pain slips between the fingers and evades reason. & during these times certain things like capitalism, politics & other kinds of stuff will surely fail us. they're just not up for this particular type of challenge. folks worry that we don't have all the answers yet — not me. i worry about folks with every type of answer. read the top of page eight for Nasio's suggestion ...

Impelled by a blow of another's mighty powers
And mighty urge; for then 'tis clear enough
All matter of our total body goes,
Hurried along, against our own desire—
Until the will has pulled upon the reins
And checked it back, throughout our members all
—Lucretius