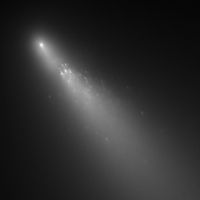 actually started writing this several hours ago, but had so much info didn't know how to sort & condense. decided to focus on SW3-C for now & add bits later when {a} CNN reports Mount Merapi about to spew & {b} i spewed first. different layers of upchuck: there's the kind where you just spill your guts, the kind where you throw up bile & the kind where your body realizes there isn't anything to throw up anymore. still feelin kinda woozy worried i'm going to throw up coffee. so far so good.

{2} researched parallel themes for SL9 & SW3 & 1994 & 2006. primarily compare/contrast themes for Clinton & Bush administrations. following list isn't comprehensive. been wondering for awhile whether Republicans would have done anything differently in 1994 if they saw 9/11 in the future — maybe that's today's political challenge.

• [14-May|01:27pm] i can only handle certain movies on the little screen. two of those movies are Schindler's List & Hotel Rwanda (which i've never seen before). after posting this noticed Hotel Rwanda was already on. the night scene driving over what Paul discovered were dead bodies perhaps the most emotional moment. Rwandan Genocide began in 1994 with its parallel being the current Darfur conflict.

{3} thinking about humanist vs. transhumanist astrology. transhumanism is neither event-oriented or person-centered, what is it? emergent-oriented? (hmm, decadent). my brother actually put this together when we were driving to LA: Chaos Astrology. my philosophy in a nutshell: As above, so below + Do what thou wilt shall be the whole of the Law + Love is the law, love under will. in the East, calendars indicate auspicious times: to marry, sign a contract, buy a house, &c. generally, i believe most people fall into prescribed orbits or patterns of behavior. i consider anything that deviates from established patterns as emergent. listing past events does not indicate what will happen, but indicates the type of energy available. explosive energy can recur automatically expressing itself along existing patterns, or, like karezza, the energy can be consciously controlled & directed elsewhere. therefore:

• As above, so below :: Sensitivity to initial conditions :: The butterfly effect is a phrase that encapsulates the more technical notion of sensitive dependence on initial conditions in chaos theory. Small variations of the initial condition of a dynamical system may produce large variations in the long term behavior of the system [...] The phrase refers to the idea that a butterfly's wings might create tiny changes in the atmosphere that ultimately cause a tornado to appear (or, for that matter, prevent a tornado from appearing). The flapping wing represents a small change in the initial condition of the system, which causes a chain of events leading to large-scale phenomena. Had the butterfly not flapped its wings, the trajectory of the system might have been vastly different.

• Do what thou wilt shall be the whole of the Law :: ichinen sanzen :: At each moment, life is endowed with the Ten Worlds. Concurrently, each of the Ten Worlds is endowed with all the others. Therefore, an entity of life actually possesses one hundred worlds. Each of these worlds possesses, in turn, thirty realms. This means that in the one hundred worlds there are three thousand realms. "Three thousand realms" might also be read as "three thousand factors." But the number is the same. The only difference lies in the method of expansion. The three thousand realms of existence are all possessed by a single entity of life. If there is no life, that is the end of the matter. If however, there is even the slightest bit of life, it contains all the three thousand realms.... This is what we mean when we speak of the "region of the unfathomable." The principle of Ichinen sanzen begins with an understanding of the mutual possession of the Ten Worlds or states of existence.

• Love is the law, love under will :: On the Truth-Process (via You Say You Want a Revolution) :: "Truth is first of all something new. What transmits, what repeats, we shall call knowledge. Distinguishing truth from knowledge is essential… For the process of truth to begin, something must happen. Knowledge as such only gives us repetition, it is concerned only with what already is. For truth to affirm its newness, there must be a supplement. This supplement is committed to chance—it is unpredictable, incalculable, it is beyond what it is. I call it an event. A truth appears in its newness because an eventful supplement interrupts repetition. Examples: The appearance, with Aeschylus, of theatrical tragedy. The eruption, with Galileo, of mathematical physics. An amorous encounter which changes a whole life. Or the French revolution of 1792. An event is linked to the notion of the undecidable. Take the sentence 'This event belongs to the situation.' If you can, using the rules of established knowledge, decide that this sentence is true or false, the event will not be an event. It will be calculable within the situation. Nothing permits us to say 'Here begins the truth.' A wager will have to be made".

ENIF (ε Pegasi) is the brightest star in the Pegasus constellation & a supergiant sharing characteristics with SADALSUUD; "erratic and violent behavior" popped a rare flare brighter than the Sun in 1972; see Enif Station in Freespace 2 universe & Clan Snow Raven of Battletech.