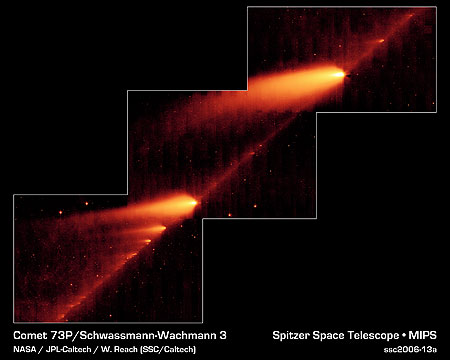 • as the cookie crumbles comet
• The Comet With a Broken Heart

watching CNN American Morning just got reminded of Comet 73P/Schwassmann Wachmann 3. first heard of this from crystaleagle (& Eric Julien who's predicting a "Big Tsunami" on 25-May) via piet on 20-April. astrologically, comets can be omens (it'll manifest some kind a way). since one of the comet's discoverers also discovered asteroids #448-NATALIE & #912-MARITIMA (which i've written about previously), i'll check Cycle #22 for anything that may resonate.

THEY'RE HERE: The many fragments of dying comet 73P/Schwassmann Wachmann 3 have arrived. For the next four days they will glide past Earth only 6 million miles away. The two biggest fragments, B and C, are easy targets for backyard telescopes. Look for them between midnight and dawn in the constellation Cygnus. Sky maps: May 12, May 13.

In 1995, 73P began to disintegrate. It was seen to break into five large pieces labelled 73P-A, B, C, D & E. As of March 2006, at least eight fragments were known: B, C, G, H, J, L, M & N. On April 18, 2006, the Hubble Space Telescope recorded dozens of pieces of fragments B and G. It appears that the comet may eventually disintegrate completely and cease to be observable (as did 3D/Biela in the 19th century), in which case its designation would change from 73P to 73D. —Wikipedia

this one's interesting: April 9th 1993 Four US warplanes fired at artillery in northern Iraq; the Baghdad government denied afterward that the artillery had provoked the attack by firing at the planes (Cygnus). on 09-May came across a 1996 CNN article: U.S. Air Force jet fires missile at Iraqi radar facility — link popped googling 33rd parallel north.