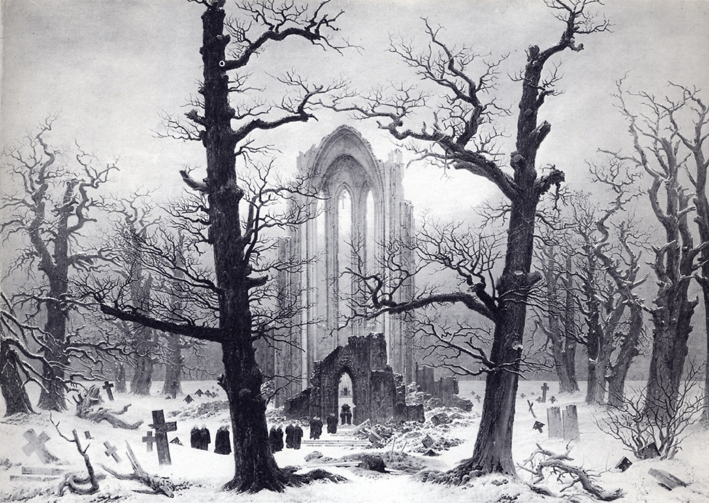 found a web page years ago in german (can't find original link) with Caspar David Friedrich's Klosterfriedhof im Schnee (Monastery Graveyard in the Snow). every now & then it comes to mind & i have to re-remember it since i keep forgetting the artist & title. unfortunately, the painting was lost during WWII, probably during the bombing of Dresden by the RAF & USAAF; Kurt Vonnegut was a POW in Dresden during the bombing — which brings back memories since i read Slaughterhouse-Five & saw the movie as a teenager. i'm writing this after uploading the image below from Napola & after grabbing the wiki-link for Dresden where it mentions Vonnegut. we got 18 inches of snow dumped on us one winter, which provided a few good snow days. whenever i think about Slaughterhouse-Five i'm always walking in the snow reading it — don't know if this is a false memory based on how the book begins or if that really happened.

couple of interesting things. Magnus Jansén at PlanetQuake uses it to illustrate graphic details in Quake: If somebody thinks that quake was never meant to be "medieval", then tell him/her to look at some of Friedrich's paintings. a japanese blog uses it to illustrate the snow-ice mood in the movie Napola: Elite Für den Führer — Napola: Hitler's Elite (German, 2004); Before the Fall (English). thought this kinda sychronotic after writing about fasces here. 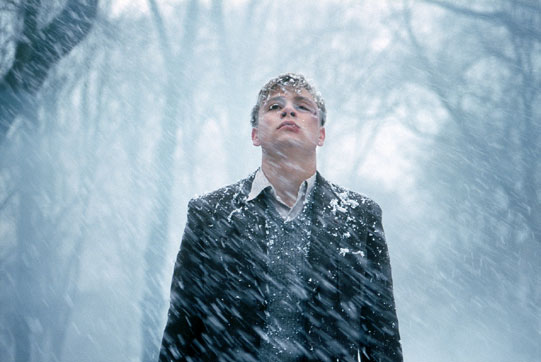 NAPOLA stands for the National-Politische Erziehungsanstalt (aka, NPEA). a good description of the school with photo. surprised to discover "abbreviation" means förkortning in german. the NPEA was started in 1933 for Germany's young crème de la crème (10 to 18 year olds) to prepare them to rule — apparently as Gauleiters, or Nazi party leaders, the unquestioned rulers of their particular areas of responsibility. probably a good example of Nazi heteronormativity (via Az). Joseph Goebbels was the Gauleiter for Berlin (list of Gauleiters); NPEA led by Heinrich Himmler & August Heissmeyer.

the Napola's main focus was to pass on Nazi ideology to embed discipline & loyalty into the Nazi maelstrom. Hitler said, In my fortresses, we shall raise a young generation that will make the world tremble with fear. I want a ruthless, commanding, fearless, savage youth ... There should be nothing weak or fragile about it ... I want my youths strong and handsome ... This is how I can give birth to something new. student motto: to be more than what seems to be. former students had successful careers in the military, politics & business.

Napola by German director Dennis Gansel (IMDb). Freidrich, the main character, based on Gansel's grandfather, a teacher in a military base in Napola (pdf presskit). Gansel mentions a famous speech used in the movie about "governors" (probably the Gauleiters), which fed into Hitler's Lebensraum policy. don't think this is it, but it's also from Adolf Hitler: What India was for England the territories of Russia will be for us... The German colonists ought to live on handsome, spacious farms. The German services will be lodged in marvellous buildings, the governors in palaces... The Germans - this is essential - will have to constitute amongst themselves a closed society, like a fortress. The least of our stable-lads will be superior to any native. Gansel wanted to make a movie about "seduction" & admits if he was around during WWII, "If they offered us a career, something to stand for and responsibility, I would be part of the Nazis". 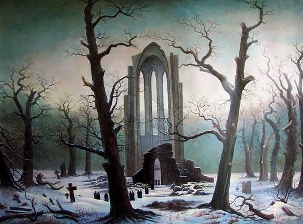 AHMANITE I (Word Theme): The Semen or Seed that gives conception to the four digit world. Reshput as the Semitic Desert Deity understood by the Egyptians to be a manifestation of their Set, and wed to Anat and Astarte. Saturnalia as the Roman mid winter orgiastic feast. Distillery that extracts the essence of the four digit material world into the three digit reality. Saturnalia as the Bacchic like festival of Rome that became crystallized into the Christian Christmas festivities. Mountain Chains as a lost Chinese Yi Ching like oracle mentioned in ancient texts. Judges, as they that critique the four digit material world according to three digit philosophical law.

AHMANITE III(# Multiples): The Law as administered by JUDGES. Reshput as an Egyptian Neter of the judgement of solar law. Mercurial(9) Love(111). Nurturing(27) according to correct principle(37).

Zeus had roused Boreas to show his might, and signalled by a downpour the rainy advent of Arktouros [the constellation Arcturus, signalled the coming of the rainy season]. All day Boreas blew softly though the topmost branches of the mountain trees and scarcely stirred the leaves. But at nightfall he fell on the sea with tremendous force and raised the billows with his shrieking blasts. —Apollonius Rhodius, Argonautica 2.1099 (BOREAS @ theoi.com)

When Zeus has finished sixty wintry days after the solstice, then the star Arcturus (25) leaves the holy stream of Ocean and first rises brilliant at dusk. After him the shrilly wailing daughter of Pandion, the swallow, appears to men when spring is just beginning. Before she comes, prune the vines, for it is best so. —Hesiod: Works And Days

From of old Nature laid such laws upon certain regions, an everlasting covenant, what time Deucalion of old cast on the unpeopled globe those stones whence the hard race of man was born. Come therefore, from the first months of the year straightway let the strong bulls upturn the rich floor of earth, and the full strength of summer suns bake the flat clods to dust. But if the land be not fertile, it will serve to ridge it by shallow furrows hard on Arcturus' rising; there, lest weeds choke the corn's luxuriance; here, lest scant moisture leave a barren waste of sand. —The Georgics of Virgil