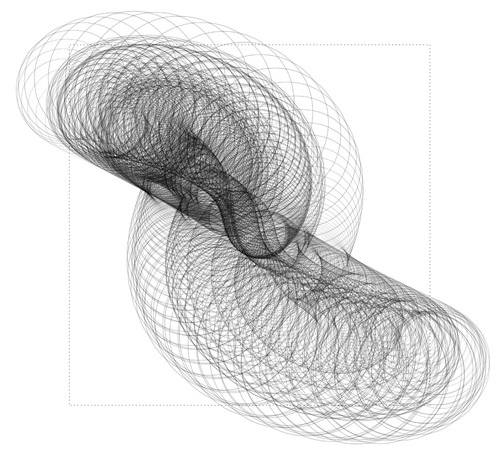 been working on a long post all weekend. put the headset on about an hour ago & heard Stitched Up by Herbie Hancock [1], featuring John Mayer: It was later in the evening / That the facts and the figures got turned around / True, there was a woman / Yes, she did advance my way / And I can't be sure exactly but I swear I saw her say my name / It was the right time / She was the real thing / I had to walk away.

at the time i was listing all the things i was thinking about. the first one i listed, & the primary one, is "sensitivity to initial conditions" (Chaos Theory). listed several more & came back to Cycle #17 & POCAHONTAS skipping EON-16, the Quincunx (Crossroads) while i seem stuck there. thinking about paradigm shifts, hodology & whatnot. so i was going to briefly explain the ENOCHIAN & ABJAD gates (involuntary/voluntary + evolutionary/involutionary). after checking my notes, have no idea what i was thinking when i set this up. all may be well, but i'm double-checking.

occurred to me POCAHONTAS returning to 827 natal position {05SG17} would be a good place to end this version of astroschyzy. also occurred to me POCAHONTAS hasn't gone retrograde yet. POCAHONTAS goes retrograde late February 2007 to around my birthday in June — less than 30° from its natal position — makes its final return on 22-Oct-2007 (close to my father's birthday, more about that later). here's the swetest output from 27-Aug-2005 to 22-Oct-2007 (787 days). note: this doesn't factor in omitted days or time changes.

think the moving thing kinda kicked me off track. i've been trying to write this since Friday. finally went to sleep without posting anything. my sister popped her knee out (again) on Saturday so i've been running errands & begging furry person not to poop & pee in the middle of the street (no luck). this morning i managed to clomp around exhaustedly fixing breakfast, feeding animals & marinating ribs. floating around my sister's office Saturday, saw two quotes. No man ever steps in the same river twice, for it's not the same river and he's not the same man, Heraclitus. the second one i copied. Harambee, Harambee by Kenyan artist Daudi Kabaka (lyrics). Let us sing together and build a world of forests. Countrymen and women Harambee, Let us pull together. Let us pull together, and lead in peace. the end note:

"Harambee" is rallying cry that for decades has brought Kenyans together to build community. During the fight for independence, it was the chant that ended every political rally. After independence in 1963 it became the Kenyan word for "fundraiser" and has been used widely throughout Kenya to build schools, hospitals, roads and even to raise funds for college tuition for a lot of Kenyans. Typically a "Harambee" is like a rally where a community comes up gets fired up to donate the sources to meet a community need.

some ideas i'm playing with:

That sensitivity can be understood as a consequence of the incalculably great number of possibilities that arise when a large number of entities interact. But it can also be argued that when a phase shift occurs in a system, as for instance, when a certain ordering of flow occurs in turbulence, a qualitative change in dynamics has occurred. This qualitative change could not have been anticipated on the basis of objective interactions between discrete components. It is not one possibility amongst others. It changes the system as a totality. The sensitivity of a system to such highly contingent and objectively trivial influences testifies to a relationality that probabilistic measures of possibility do not capture or address.

[2] owen hatherley & Live at the Witch Trials (via it & k-punk). {a} Brian Eno & Oblique Strategies. Geeta Dayal mentions one of them: Discover the recipes you are using and abandon them. i go here to get some random strategies: The most important thing is the thing most easily forgotten. {b} Amos Tutuola's My Life in the Bush of Ghosts: This fruit tree was a "SIGN" for me and it was on that day I called it—THE "FUTURE SIGN".

[3] there are 36 EON phases. in astroschyzy, every asteroid, fixed star, comet, etc., on the 827 List is paired with Zero Point (ORCHIS' natal position on 27-Aug-2005); natal position establishes the natal phase. the transit phase is compared with the natal phase. half of the EON phases are waxing (increasing), half are waning (decreasing) & both are symbolic of the lunar phases. waxing phases lead to the Opposition, or the greatest distance between the planetary pair. waning phases lead to a Conjunction (szygy). maybe one way to think of Meyer's futureward & pastward involves seeing the 36 EON phases generating enough momentum to create a syzygial amplexus? asteroid transits = tadpoles leaving the pond (waxing) & finally returning as frogs for a syzygial amplexus (waning). sometimes this ends with a mad fungeball clutching a boot, a rock or some other inappropriate object. or, as i heard somebody describing The Notorious Bettie Page, there's no sex there.

[4] several weeks ago picked up the 21-Nov-2005 issue of Newsweek (Europe's Time Bomb): what is 'normal' is no longer sustainable. my reality indicator refuses to dial back to (N)ormal. what i hope it points to is what is sustainable. what kind of singularity is 9/11? does it demand or require an ontological shift? eg, are generals falling on swords still a viable option in a transformative military, post-9/11?

[5] looking for some tax papers the other day, came across an old Landmark handout about eight operating states of a project (formulation, concentration, momentum, stability, breakthrough, mastery, emergency & danger). seems like i've been coasting between emergency & danger forever. Breakthrough: A sourceful structure apprehended from a lower operating state looks weird, like a three-dimensional structure forced into two dimensions. That which was familiar is not familiar. The old structure is inadequate. The way in which you have known something won't work anymore. (Change the recipe?). reminds me of Flatland.

[6] POCAHONTAS had no trouble at the Quincunx, but i'm still at the crossroads. think you need a paradigm shift when you don't have a clear pathway. think Walsch's Be-Do-Have Paradigm acknowledges that before we walk an external pathway, we've got to identify the internal pathway first. i was looking for a specific quote about Allah & pathways & found a couple of things in my notes.

• Mt. Hara-Berezaiti, identified as Mt. Alborz. The Bundahishn mentions as existing at this mountain a "Bridge of Judgement" or "Bridge of Moral Discrimination" which is a pathway leading to the Otherworld. This bridge or pathway is supposed to run between two mountains, Chakad-e-Daitik and the Arezur ridge of Mt. Alborz. —Zoroastrian Sacred Sites, Iran

• A rhizome may be broken, shattered at a given spot, but it will start up again on one of its old lines, or on new lines. —Deleuze & Guattari

the quote i was looking for is from Adab al-Suluk: A Treatise on Spiritual Wayfaring (see: al-biruni's manzils):

• And you should know that God, the Exalted, by His perfect Might and Wisdom has destined two journeys for the Children of Adam. One of them is involuntary (qahri), and the other one is voluntary (ikhtiyari).

bunch of links i still need to sort out:

something else needs saying. maybe it should go something like this (from Jared Tarbell, his artwork's at the top of this post): I expressly enjoy the free flow of ideas and code. i support & believe in Open Source practices. anyone is free to take any artwork, ideas or work of mine (as long as they do not infringe on the rights of others) & do whatever they wish. the "initial conditions" of this LJ involved sharing what i learned. just as i have been inspired, maybe i can inspire someone else. perhaps go a little further, dream a little bigger. i think of myself as a creative generalist, or a creative theorist. love what

monde says: Well, I do take "this stuff" seriously [...] I also don't take it seriously at all. It IS possible to maintain dual and oppositional reality belief matrices. If I didn't, I really WOULD go crazy.

i'll keep updating astroschyzy & post it here until 13-Dec-2008, or whenever ORCHIS returns to its natal position. cycles 18-22 up before the move.

the other thing to say is this. when i was at devry, took my tarot deck one day & decided to see what would happen if i gave "readings". my readings were very simple, i just explained the symbols. after doing a couple of "readings" i got my spiel going. i was doing this outside where people were chatting, smoking & eating between classes. me, i was playing hooky. i distinctly remember a persian guy asking for a reading, totally brushing off my spiel. he'd heard enough of what was said before & was willing to ask me a question. a couple asked for a reading. i forgot what was said, but they wanted to do them separately. they were a popular well-known couple on campus, she was mexican with a small daughter, he was caucasian. about an hour later, inside, i gave the guy his reading pulling the Empress & 3 of Swords (Waite deck, a large heart with three swords in it). i described the fertility of the first card & the deep sorrow of the second card. maybe you can figure out what happened next. he thanked me, i sensed something shifting. we were in the tutor lab & my boss coming over with a frown of disapproval seemed to add the appropriate amount of drama to the situation. later that night, still at school in an empty cafeteria with her daughter twirling in the middle of the floor, the woman told me she was pregnant. what should she do? i don't remember giving her a reading. what was said earlier was apparently sufficient. at that time i was unaware of ceremonial magick, invocation & evocation. however, i'd done meditations sending energy to the earth to ground myself & energy upwards. that night i remember sitting back, closing my eyes, grounding myself & sending such a stream of energy upwards i thought i'd never stop. & i wouldn't, until someone answered her. i could not. i don't remember what i said to her & don't know if she kept the baby. all i know is that they both left school. what i got that day was the diviner, the querent, the deck & something else. i believe the Golden Dawn calls that something else the Angel HRU, the Angel of the Tarot.