On 19 November 1959 the Cooktown Orchid, under the botanical name of Dendrobium bigibbum var phalaenopsis, was proclaimed as the floral emblem of Queensland (Act). It conformed with the Government's criteria in being an easily cultivated native species confined to Queensland, decorative and distinctive in appearance, and coloured close to the State colour, maroon + The generic name Dendrobium is derived from the Greek 'dendron', meaning 'tree', and 'bios', meaning 'life'; plants of many species of this genus perch on tree trunks and branches. The specific name phalaenopsis from the Greek 'phalaina', meaning 'moth', due to the flower's resemblance to a moth. Dendrobium is a very large genus of more than 1400 species in south and east Asia and in the south-west Pacific. Dendrobium belongs to the orchid family, the largest family of flowering plants. This family is distributed widely throughout the world, with the greatest number in tropical areas + The common name, Cooktown Orchid, refers to the northern Queensland town, Cooktown, which lies within the distribution of the species on the Endeavour River, named by Captain Cook after his ship was repaired there in 1770 + Cooktown Orchid is considered one of Australia's showiest orchid species and has been successfully cultivated in heated glasshouses in England since the latter part of the nineteenth century. In recent years they have been exported from Australia to New Zealand, USA, Papua New Guinea and Fiji + List of Dendrobium species.

Archibald Campbell founded a Wattle Club in Victoria in 1899 to promote a Wattle Day demonstration every September to encourage recognition of the flower as a symbol of patriotism. In 1908 he delivered a lecture entitled 'Wattle Time; or Yellow-haired September' in which he stated that 'by numbers, the Wattle is almost exclusively Australian, and should undoubtedly be our National Flower'. Interest in a national Wattle Day was revived in Sydney in 1909. Victoria and South Australia participated in 1910, and Queensland in 1912 + Australians representing their country in international sporting events usually wear the national colours, green and gold, said to be based on wattle foliage and flowers.

Golden Wattle (Acacia pycnantha) is Australia's floral emblem. It is a small tree, ranging from 4 to 8 metres tall. The mature trees do not have true leaves but have long (6 to 20 cm), sickle-shaped, photosynthetic stalks called phyllodes. The trees flower in spring (generally September) producing fragrant fluffy golden flowers. Golden Wattle can be found on many symbols of Australia including the Australian Coat of Arms and the Order of Australia medal. The green and gold colours are often used in Australian international sporting teams. The flower has been used as Australia's national emblem since early in the 20th century but was not made the official national floral emblem until 1988, the year of Australia's bicentenary. The 1st of September is "National Wattle Day" in Australia.

Acacia is a genus of shrubs and trees of Gondwanian origin belonging to the Subfamily Mimosoideae of the Pea Family (Family Fabaceae), first described from Africa by Linnaeus in 1773. There are roughly 1300 species of Acacia worldwide, about 950 of them native to Australia, with the remainder spread around the dry tropical to warm-temperate regions of both hemispheres, including Africa, southern Asia, and the Americas. The Genus Acacia however is apparently not monophyletic. This discovery has led to the breaking up of Acacia into five new genera as discussed in List of Acacia species + The bark of various Australian species, known as wattles, is very rich in tannin and forms an important article of export; important species include Acacia pycnantha (Golden Wattle), Acacia decurrens (Tan Wattle), Acacia dealbata (Silver Wattle) and Acacia mearnsii (Black Wattle). Black Wattle is grown in plantations in South Africa. The pods of Acacia nilotica (under the name of neb-neb), and of other African species are also rich in tannin and used by tanners + Many Acacia species contain some psychoactive alkaloids of which DMT and NMT are the most prominent and useful. The leaves, stems and/or roots can be made into a brew together with some MAOI-containing plant to obtain an effect when taken orally. This could be seen as a kind of Ayahuasca. Maybe in relation to this effect, Egyptian mythology has associated the acacia tree with characteristics of the tree of life (cf. article on the Legend of Osiris and Isis).

• asteroid #7796-JÁRACIMRMAN (Ila asteroid family) discovered 16-Jan-1996 by Czech astronomer Zdeněk Moravec, named for fictional Czech character Jára Cimrman created by Jiří Šebánek & Zdeněk Svěrák; Moravec also discovered asteroids MONTY_PYTHON, ASTERIX & OBELIX + discovered on the Kleť Observatory (Czech Republic) on 16 January 1996 by Zdeněk Moravec and was designated 1996 BG. It was observed until April 1996 and then in June and July 1997. It was discovered to be a lost asteroid which had previously been observed twice: at Brera-Merate Observatory in northern Italy on 12 December 1973 and at Mount Stromlo Observatory (near Canberra, Australia) on 8 and 9 July 1990 + The citation accompanying the suggestion said: "Named for Jára Cimrman, a fictitious Czech genius. An analogue to Leonardo da Vinci, he was a playwright, composer, poet, painter, versatile scientist, inventor, polar explorer, sportsman, first man on the moon, etc. Although his name is not mentioned in any encyclopedia, his work is explored at the Jára Cimrman Theatre in Prague. This theatre is headed by the famous cimrmanologists Z. Svěrák and L. Smoljak, who endorsed the name proposal." 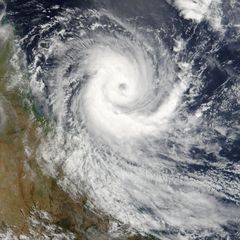 [+] TCWC Brisbane issued a gale warning for a Tropical Low in the Coral Sea on March 16. On the same day, RSMC Nadi classified it as a deepening tropical depression (15F). On March 17, the tropical low strengthened into Tropical Cyclone Larry. Larry moved towards the Queensland coast and gradually intensified to Category 5 on the Australian scale, making landfall with that strength on March 20. At 1300 UTC on March 20 (0100 AEST March 21), Larry was downgraded to a tropical low and the title of "Ex-Tropical Cyclone" was amended. As of 0000 UTC March 21, Larry had central pressure 1002 hPa. Ex-Tropical Cyclone Larry was downgraded to a low-pressure system at 1am AEST March 21, 2006. Strong wind gusts are still occurring in the affected area.

Queensland often nicknamed the Sunshine State, since it enjoys warm weather and a sizable portion of the state is in the tropics + Queensland was originally a British Crown Colony that was separated from New South Wales in 1859. What is now Brisbane was originally the Moreton Bay penal colony, intended as a place to hold convicts who re-offended while serving out their sentences in New South Wales.

Innisfail is a town located in the far north of the state of Queensland, Australia (17°33'S 146°05'E) ... approximately 1,631 kilometres (1,013 miles) north of Brisbane, the capital of Queensland, and approximately 90 kilometres south of Cairns + The main industries of the area include banana and sugar cane plantations. Tea, pawpaws and other exotic fruits are grown around Innisfail. It is a popular destination for backpackers seeking employment in the banana industry. There are also substantial reef fishing, prawn fishing industry and a popular recreational fishing area + Tropical Cyclone Larry, a Category 5 (Australian classification) cyclone, struck the locality at 7am on 20 March 2006 [The eye hit Innisfail with gusts up to 290 kilometers per hour (180 mph) at about 7:30 a.m. (2030 Sunday GMT), according to Australia's Bureau of Meteorology - CNN], with the eye of the storm passing over the town. Severe structural damage was done to Innisfail, such as houses losing roofs and windows being blown out. 50,000 homes in the region were left without power. Severe damage was done to crops and plantations which will have a devastating economic impact on the region. 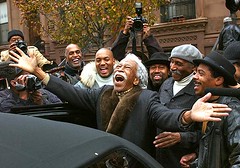 [+] In documenting the Black Power movement in the 1960s, Parks gained unprecedented access to the Black Muslims and the Black Panthers and produced memorable photo essays on both organizations. "The black militants wanted their voices heard by a lot of people, and Life wanted to get their stories," Parks told Britain's Guardian newspaper in 1993. "Life tried without me at first — they sent white photographers, but they couldn't get into the groups. So both of them realized that they had to trust me." After black rioting in the 1960s, Parks documented the poverty and racism that were at the root of the unrest with his 1968 Life photo-story on the Fontenelles, a poverty-stricken family living in a filthy, rat- and roach-infested brick tenement in Harlem.

Parks' Life magazine assignments were not without risks. While covering the civil rights movement and other events in the South for the publication, he was twice threatened with lynching. And after he wrote a piece on the 1965 assassination of Malcolm X and the FBI learned of a plan to murder the photographer, Life sent Parks' family abroad and put him under 24-hour armed guard at the Plaza Hotel in New York.

In 1997, the Corcoran Gallery of Art in Washington, D.C., launched the career-spanning show "Half Past Autumn: The Art of Gordon Parks," which toured museums across the country. Tom Bamberger, adjunct curator of photography at the Milwaukee Art Museum, told the Milwaukee Journal Sentinel in 1998 that Parks was a significant figure in photography. "He epitomizes the worldview that all people, regardless of differences, have more in common than what separates them," Bamberger said.

[+] The brother had a nice run, though [+] Gordon Park Queensland [+] "Gordon" Atlantic Names for 2006 Hurricane Season.

• asteroid #1862-APOLLO discovered 24-Apr-1932 by German astronomer Karl Wilhelm Reinmuth + Q-type asteroid, discovered by Karl Reinmuth in 1932, but lost and not recovered until 1973 + Prototype for Apollo asteroid family & Venus- and Mars-crosser asteroid + first asteroid recognized to cross Earth's orbit (although the earlier-discovered 887 Alinda is now known to do so as well) + On November 4, 2005, it was announced that an asteroid moon, or satellite of Apollo has been detected by radar observations from Arecibo Observatory, Puerto Rico, 29 October–2 November 2005. The standard provisional designation for this satellite is S/2005 (1862) 1.

[+] Honeysuckle Creek was a NASA spacecraft-tracking station near Canberra, Australia at 35°35'02"S, 148°58'37"E from 1967 to 1981. It served as a communications relay station for Project Apollo. In 1981 its 26m antenna was relocated to the Canberra Deep Space Communications Complex at nearby Tidbinbilla.

[+] Parkes Observatory is a radio telescope observatory, 20 kilometres north of the town of Parkes, New South Wales, Australia at 32°59'59.8"S, 148°15'44.3"E. During the Apollo missions to the moon, the Parkes Observatory was used to relay communication and telemetry signals to NASA, providing coverage for when the moon was on the Australian side of the Earth. The observatory has remained involved in tracking numerous space missions up to the present day, including those of the Voyager, Giotto, Galileo and Cassini-Huygens probes. It is also a major world centre for research into pulsars, with more than half of those currently known today discovered at the Parkes Observatory.

[+] The Dish (movie) - 2000 Australian film; fictionalized story about how Parkes Observatory relayed the live signal during the Apollo 11 mission in 1969.

all asteroids added to Oankali.