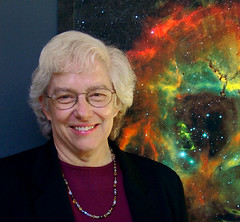 Sidney C. Wolff, the Director of the National Optical Astronomy Observatories (NOAO), is the first woman to head a major observatory in the United States. NOAO, which includes the Kitt Peak National Observatory in Arizona, the Cerro Tololo Inter-American Observatory in Chile, and the National Solar Observatory with facilities at Sacramento Peak, New Mexico and Kitt Peak, is a national astronomy facility in the U.S. open to astronomers around the country on a competitive basis. Wolff has earned international recognition for her research on stellar atmospheres and the evolution, formation, and composition of stars, with an emphasis on A-type stars. She is currently studying disks of gas and dust that form around young stars, and trying to determine how often those disks evolve into planets orbiting the stars.

After receiving her Ph.D. degree from the University of California at Berkeley, Wolff joined the Institute for Astronomy at the University of Hawaii. During the 17 years she spent in Hawaii, including a stint as Acting Directory, the Institute developed the 14,000-foot summit of Mauna Kea, a dormant volcano on the island of Hawaii, into the world's premier site for ground-based astronomy. The facilities on Mauna Kea include telescopes from Canada, France, the United Kingdom, the Netherlands, and Japan as well as the United States. In 1984, she was named Director of the Kitt Peak National Observatory, and three years later she become Director of NOAO, She has recently taken leave from NOAO to serve as Acting Director of the Gemini Project, and international collaboration to build two eight-meter telescopes.

Wolff's interest in astronomy was sparked by a third grade spelling lesson that included astronomical terms. She became fascinated by the subject and read all kinds of books about astronomy. Her father, a businessman, insisted that she take as much math in high school as she could, which gave her the basis she needed to study astronomy in college, something many girls who had not taken as much math had trouble doing. In her sophomore year at Carleton College in Minnesota, she had to decide between a major in astronomy or in Latin. Astronomy won, a decision she has never regretted. Wolff is co-author of three widely used introductory-level astronomy textbooks for college students. She serves as President of the A.S.P. [Astronomical Society of the Pacific] in 1985 and 1986, and was elected President of the American Astronomical Society in 1992. In both cases, she was only the second woman to hold the position. (Courtesy NOAO).

© 1992 Astronomical Society of the Pacific

Wolff is currently a staff astronomer at the National Optical Astronomy Observatory (NOAO).