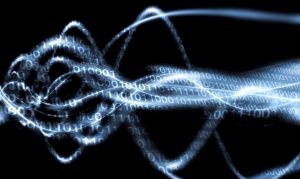 AQ 3870 = GateHouse BGAN waveform for the Inmarsat BGAN satellite system… The waveform is type approved by Inmarsat. The SCA platform contains the hardware, including typical SDR items such as RF, FPGA, DSP and GPP and the SCA core framework = The Seventy-second Spirit is Andromalius. He brings back both a Thief, and the Goods which be stolen; discovers all Wickedness, and Underhand Dealing; punishes all Thieves and other Wicked People and also discovers Treasures that be Hid. 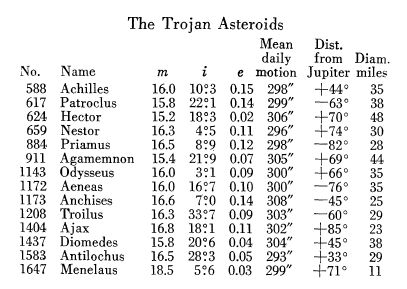 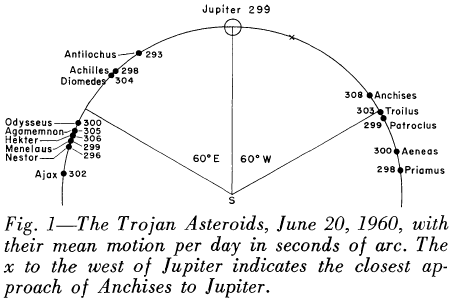 AQ 2156 = Achilles · Patroclus · Hector · Nestor · Priamus · Agamemnon · Odysseus · Aeneas · Anchises · Troilus · Ajax · Diomedes · Antilochus · Menelaus = May your strength give us strength, may your faith give us faith, may your hope give us hope, may your love give us love.

• 15050 describes 90° Square aspect as a gate (light and dark). Dane Rudhyar writes about the "fourfold field of activity", and the Fixed signs (♉♌♏♒) at 15°: "They are the four gates through which the word of God is spoken and God's power is released."

AQ 4211 = Cioran, in his essay on tyranny in History and Utopia, quotes one of those marvelous marbleized sentences of Montesquieu: When Sylla wished to give liberty to Rome, Rome could no longer receive it, having only a feeble remnant of virtue left = Ouarda now told me to enter the room, where all this work had been done, exactly at noon on April 8th, 9th and 10th, and write down what I heard, rising exactly at one o'clock. This is [sp] did. In these three hours were written the three chapters of The Book of the Law.

AQ 4183 = Ouarda now told me to enter the room, where all this work had been done, exactly at noon on April 8th, 9th and 10th, and write down what I heard, rising exactly at one o'clock. This I did. In these three hours were written the three chapters of The Book of the Law = In early legend our pisces australis was the parent of the zodiacal two (Pisces, the Two Fishes), and has always been known under this specific title, varied by the other adjectives of equivalent signification, austrinus, meridionalis, and notius (Pisces Australis, the Southern Fish).

AQ 4510 = For only a brief instant she felt she had a connection. Dragons? The question came to her more as a feeling than a thought. Sick? How? And in that instant Lorana knew the answer. Across the link, with the greatest effort she could muster, she shouted out loud and in her mind, "Air!" (Dragonsblood) 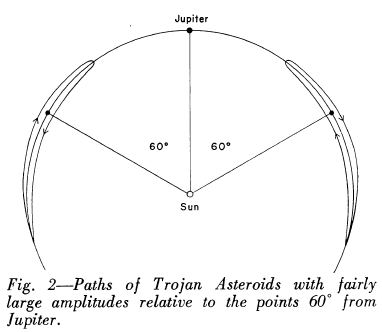 Actually, the orbit of Jupiter is not circular (e=0.048) and the orbits of most of the Trojans are even more eccentric. Moreover, the other planets, especially Saturn, upset the stability of the idealized problem of Lagrange. Therefore, the Trojan asteroids do not stay very close to the 60° points but oscillate around them in peculiar paths. (Figure 2). As they oscillate, their periods and mean distances from the sun change, being equal to those of Jupiter at both ends of the path. A Trojan ahead of Jupiter will increase its lead, if its mean motion is faster than Jupiter's. As the asteroid moves further from Jupiter, the force of Jupiter's pull and its direction relative to the asteroid's velocity change in such a way that the mean motion of the asteroid decreases until it is equal to that of Jupiter. Then the asteroid's mean motion becomes less than Jupiter's and Jupiter gains on it in their race around the sun. As the asteroid's distance from Jupiter approaches 60°, the difference between their speeds reaches a maximum. Therefore a Trojan does not linger at the 60° point and is more likely to be found elsewhere along its path.