Weaponized Books of 2010 :: Re-Imagining War in the 21st Century by Manabrata Guha & The Blank Swan by Elie Ayache ~ http://tiny.cc/tsy5a

That tiny URL should go to: Weaponized Books of 2010

We shouldn’t assume there was a grand plan

The Blank Swan is Elie’s highly original treatise on the financial markets — presenting a totally revolutionary rethinking of derivative pricing and technology. It is not a diatribe against Nassim Taleb’s The Black Swan, but criticises the whole background or framework of predictable and unpredictable events — white and black swans alike —, i.e. the very category of prediction. [1]

The Bible tells that king Saul waged war against the Edomites (1 Samuel, 14.47) and that David gained supremacy over the Edomites (2 Samuel, 8.13-14). A pro-Egyptian insurrection against David's son and successor Solomon is also recorded (1 Kings, 11.14), but from the Biblical remark that Solomon could send out ships to a country named Ophir (1 Kings, 9.26-28), we may deduce that he regained control (cf. 1 Kings, 22.48-50).

The former US Chairman of the Joint Chiefs of Staff, General Peter Pace, United States Marine Corps (USMC), in his assessment of the Quadrennial Defense Review (QDR) 2006, remarked that “[a]ny attempt to predict the future security environment of 2025 is inherently difficult… Given the dynamics of change over time, we must develop a mix of agile and flexible capabilities to mitigate uncertainty.” He also noted that the QDR acknowledges that “victory in this long war depends on information, perception, and how and what we communicate as much as [the] application of kinetic effects” While General Pace’s immediate reference was to the war on terrorism, the sense of uncertainty and indeterminacy that permeates his assessment points to the growing recognition that “victory” is as transient as the other elements that constitute this emerging condition. When considered in the context of the rationally predictable security calculus of the now fading Cold War strategic paradigm, this recognition represents a distinct shift in how global militaries — particularly the US military and defense establishment — have begun to perceive the emerging strategic environment. The 2006 QDR describes this shift in the following terms:

• From a peacetime tempo — to a wartime sense of urgency
• From a time of reasonable predictability — to an era of surprise and uncertainty
• From single-focused threats — to complex challenges
• From nation-state threats — to decentralized network threats
• From conducting war against nations — to conducting war in countries we are not at war with (safe havens)
• From large institutional forces (tail) — to more powerful operational capabilities (teeth).

What is interesting about this description is that perhaps for the first time in the history of the modern military, the military machine — a state-owned and run apparatus — is explicitly thinking of and, in some cases, even operating outside the orbit of the State.

Theorizing war in the age of networks
=
“We fight, get beat, rise, and fight again”
Nathanael Greene 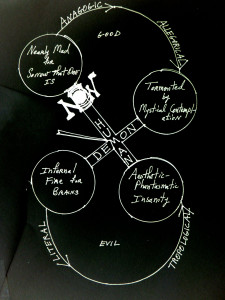