FAR SIDE OF THE SUN: (08-Feb) The sun has been spotless for 10 consecutive days—or has it? The side of the sun we can see from Earth is utterly blank. The far side of the sun is a different story. Helioseismic images reveal a good-sized sunspot there. The sun spins on its axis once every 27 days. This motion will carry the farside spot around to the Earth side of the sun on or about February 20th. Stay tuned.

NEW SUNSPOTS: (09-Feb) Magnetic fields are poking through the surface of the sun, forming two new, small sunspots. This ends ten consecutive days of blank suns. Because the spots are so small, solar activity should remain low. 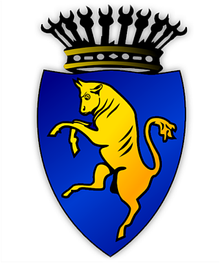 Turin (Italian: Torino; Piedmontese: Turin) is a major industrial city in north-western Italy, capital of the Piedmont region, located mainly on the west bank of the Po River. The population of Turin city is 908,000 (2004 census), but with its metropolitan area totals about 1.7 million inhabitants. The province is one of the largest in Italy, with 6,830 sq. km, and one of the most populous, with 2,236,941 inhabitants at the 2004 census ... The name of Turin comes from Tau, a Celtic word that means mountains. The Italian name, Torino, happens to mean "little bull" in Italian; hence the coat of arms and the symbol of the city. The area was settled by the Taurini in pre-Roman times ... The Cathedral of St John the Baptist houses the Shroud of Turin, an old linen cloth with an imprint of a man, which is believed by many to be the cloth that covered Jesus in his grave. The Museo Egizio has the most important collection of Egyptian antiquities in the world after the Cairo Museum.

After Alexandria, Madrid, New Delhi, Antwerp and Montreal, Turin has been chosen by UNESCO as World Book Capital for the year 2006 because of its activity of book and reading promotion, especially with the International Book Fair, one of the most important fairs in Europe of its kind ... Turin was also the city were the FISA (international rowing federation) was born in 1892 ... [and most important!] Turin is the birth place of solid chocolate. It was in Turin that Doret invented a revolutionary machine that could make solid chocolate as we eat it now at the end of the 18th century. Turin produces a typical chocolate, named Gianduiotto after Gianduia, a local Commedia dell'arte mask, and many other kinds of chocolate in a host of confectioneries all around the city.