SENFTENBERG (Žamberk) where Brorsen discovered two comets (co-discover of one of the comets, 23P/Brorsen-Metcalf, John Metcalf who also discovered #1345-POTOMAC); it's also one of the sub-camps of Sachsenhausen concentration camp (Arbeit Macht Frei, Work Makes You Free) & where Martin Niemöller was a prisoner (First They Came).

so i was thinking about unpacking all this & explaining this a little better & i started thinking of seeds. i can give you a handful of seeds of different things but you might not be able to tell what emerges from each of them. that's when i thought of pharyngula — embryos share similar characteristics (see below) during their development. seems to me the 827 List/Transits look like a bunch of seeds. wtf? so i'm trying to describe them like pharyngulas — successfully procrastinating writing this post! since it's so toooough 'splaining things {whine}. but i shall cut-paste some of the stuff from that post:

"442 MAAT" gematria the work of Abba Yesai Nasrai. i've been using this for years — even though i'm not exactly sure what "ahmanite" means. (another great gematria resource, see: 442). in the O:N:E: gematria system (values here) gegenschein = 442. 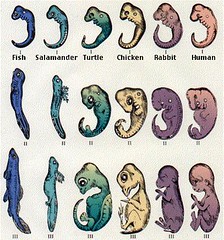 Taxonomy: Classifying LifePharyngula Period — Ballard (1981) coined the term "pharyngula" to refer to the embryo that has developed to the phyolotypic stage, when it posesses the classic vertebrate bauplan. According to von Baer's famous laws (discussed by Gould, 1977) this is the time of development when one can most readily compare the morphologies of embryos of diverse vertebrates, and for the zebrafish we approximate the period as the second of the three days of embryonic development (Fig. 29). The embryo is most evidently now a bilaterally organized creature, entering the pharyngula period with a well-developed notochord, and a newly-completed set of somites that extend to the end of a long post-anal tail. The nervous system is hollow and expanded anteriorly. With the rapid cerebellar morphogenesis of the metencephalon (Fig. 30A), just preceding the pharyngula period, the brain is now sculptured into 5 lobes (Fig. 23C).

Taxonomy: Classifying Life — The embryonic development of all vertebrates shows remarkable similarities as you can see from these drawings (supplied by Open Court Publishing Company). The drawings in the top row are of the embryonic stage called the pharyngula. At this stage ("I") they all contain a: notochord, dorsal hollow nerve cord, post-anal tail, and a series of paired branchial grooves (first branchial arch).

Flap those gills and fly! — One of the common creationist claims I plan to shoot down is the whole idea of "irreducible complexity" as an obstacle to evolution. I was going to bring up two ideas that invalidate it: the principle of scaffolding (which I discussed here), and exaptation, in which features evolved for some other purpose than the one that they play in an organism we observe today. I was looking for a good example, and then John Wilkins fortuitously sent me a paper that filled the bill (we evilutionists, you know, are sneakily sending each other data behind the scenes to help in our assault on ignorance. We're devious that way) ... In insects, we have an interesting origin explanation for wings: they're modified gills. It makes sense. For gills, you want to have an increased surface area for gas exchange, and you want them exposed to the external environment. Most animals evolved sophisticated gills with convoluted surfaces and tucked them away in a protective chamber, with a mechanism to pump water over them, but others took a simpler path.

Embryo drawings — In 1866, Ernst Haeckel claimed that members of all vertebrate classes pass through identical embryonic stages. To illustrate this, he published drawings of embryos of various species (namely, human, rabbit, calf, hog, chick, tortoise, salamander, and fish), suggesting that the early stages of embryonic development are nearly identical for all of these classes. Haeckel argued that this was evidence for the theory of common descent in discussions of biological evolution, and also used his drawings to propound his now-discredited recapitulation theory. 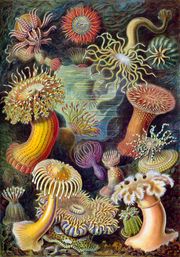 Sea anemones by Ernst Haeckel — eminent German biologist and philosopher who promoted Charles Darwin's work in Germany. Haeckel was a zoologist, an accomplished artist and illustrator, and later a professor of comparative anatomy. He was one of the first to consider psychology as a branch of physiology. He also proposed many now ubiquitous terms including "phylum" and "ecology." His chief interests lay in evolution and life development processes in general, including development of nonrandom form, which culminated in the beautifully illustrated Kunstformen der Natur (Art forms of nature). Haeckel advanced the "recapitulation theory" which proposed a link between ontogeny (development of form) and phylogeny (evolutionary descent), summed up in the phrase "ontogeny recapitulates phylogeny". He supported the theory with embryo drawings that have since been shown to be inaccurate, and the theory is no longer generally accepted. Haeckel was also known for his "biogenic theory", in which he suggested that the development of races paralleled the development of individuals. He advocated the idea that "primitive" races were in their infancies and needed the "supervision" and "protection" of more "mature" societies.

He extrapolated a new religion or philosophy called Monism from evolutionary science. In Monism, all economics, politics, and ethics are reduced to "applied biology." His writings and lectures on Monism provided scientific (or quasi-scientific) justifications for racism, nationalism and Social Darwinism. It has even been argued that monism thus became the de facto religion of Nazi Germany. Other scholars disagree, arguing that Nazi ideology was not comfortable with evolutionary theory, which argues for a common descent of all human races.

Haeckel was a flamboyant figure whose popularity with the public was substantially greater than it was with his scientific peers. He sometimes took great (and non-scientific) leaps from available evidence. For example, at the time that Darwin first published On the Origin of Species by Means of Natural Selection, no remains of human ancestors had yet been found. Haeckel postulated that evidence of human evolution would be found in the Dutch East Indies (now Indonesia), and described these theoretical remains in great detail. He even named the as-of-yet unfound species, Pithecanthropus alalus, and charged his students to go find it.
- - - - - - - - - - - - - - - - - - - - - -
Mount Haeckel is a 4090 m (13,418') summit in the Eastern Sierra Nevada, overlooking the Evolution Basin, named in honor of Ernst Haeckel as is the asteroid 12323 Häckel. Ernst Haeckel, much like Herbert Spencer, was always quotable, even when wrong. Although best known for the famous statement "ontogeny recapitulates phylogeny", he also coined many words commonly used by biologists today, such as phylum, phylogeny, and ecology. On the other hand, Haeckel also stated that "politics is applied biology", a quote used by Nazi propagandists. The Nazi party, rather unfortunately, used not only Haeckel's quotes, but also Haeckel's justifications for racism, nationalism and social darwinism.