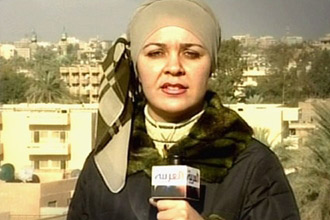 Two weeks back a news item about a news person has not just re-drawn attention to the parameters of journalistic freedom, but has also reaffirmed generally accepted views about government misinformation and media manipulation, especially during times of hostili­ties, not least by the vocif­erous advocates of liberal democratic norms. Atwar Bahjat, a female correspon­dent of the Arabic satellite TV network Al-Jazeera, was detained by US troops while she was carrying out pro­fessional duties in Baghdad. Her employers accused that the arrest was harshly executed. Normally, military ar­rests are not courteous affairs during situations of bel­ligerency, but the Al-Jazera correspondent's (particularly in view of the fact of her being of her sex) method of detention has interesting implications. The Americans explained her detention on the allegation that she was in breach of mili­tary order. What she was doing was gathering information from up close about the im­mediate aftermath of an Iraqi re­sistance attack on US soldiers. The Americans admitted to a certain number of fatalities and injured personnel, but the very fact the Bahjat was arrested while in the process of gathering in­formation about the incident in the face of a tight military cordon may be construed to attest to a strongly-held suspicion: that the Americans, in their official press briefings, minimize their actual casualty figures. And Bahjat could have been finding out the real picture when she was unceremoniously led away to her detention.

Atwar Bahjat (1976(?) – 22 February 2006) was an Iraqi journalist and reporter for al-Arabiya television at the time of her death. She had previously worked for al-Jazeera. In the aftermath of the 2003 Iraq War she became one of the most familiar faces on Arabic-language satellite television. Bahjat came from an religious diverse background, having a Shia mother and a Sunni father. She was abducted and killed in Samarra in the aftermath of the 22 February 2006, bomb attack that devastated the Al Askari Mosque. A cameraman, Khaled Mahmoud Al Falahi (39) and a technician Adnan Khairallah (36) were killed along with her. A fourth member of the team managed to escape the ambush.

The killing of Atwar Bahjat, who rose to fame reporting from Iraq for both main Arabic satellite news networks, has shocked Arab journalistic circles. Gunmen kidnapped and killed her and two members of her crew near where they had gone to cover reaction to Wednesday's shrine bombing. A member of the al-Arabiya TV team who escaped described how two gunmen showed up as they stood in a crowd of Iraqis. They dragged Bahjat and her colleagues away and shot them. Their bodies were found on the outskirts of Samarra, an area racked by sectarian violence since Wednesday's explosion that destroyed the revered Shia Muslim al-Askari shrine ... Al-Arabiya said it lost contact with its team at 1500 GMT, shortly after nightfall. The three bullet-ridden bodies were found the following morning. The station has been showing the last report Bahjat filed - in fading light beside a road outside Samarra, close to where the team was kidnapped. They had been about to return to base in the northern city of Kirkuk when two gunmen drove up in a pick-up truck, al-Arabiya correspondent Ahmed al-Saleh reported on the morning news programme ... The correspondent described Bahjat as a "victim of truth; she loved her country and died because of her impartiality."

Who Bombed The Shrine? Who Killed The Journalists?

{via lecolonelchabert} The perfect controlled demolition. Take a good look at the picture above because I will tell you what I see. I see a damaged dome caused by an explosion set very professionally that the two minarets from the both sides weren’t effected by the explosion. Not even one single “gold plate” fall down from the minarets while the explosion was so heavy that caused the collapse of the dome. Tell me, Is this work of few terrorists who wants to finish the job as fast as possible? The one who did this, entered the mosque comfortably carrying explosions, he had all the time to study the construction of the building and find the perfect angles to set the explosions in a way that only the dome will be destroyed. This is a professional, controlled demolition and the bombs set by demolition experts.

Attwar, the TV Anchor. Now, let’s talk about the death of the three Iraqi journalists. TV anchor Attwar, age 26 years is a significant young woman born in Samarra, moved to Baghdad just 3-4 years ago, Attwar worked for Al-Jazeera first and then she moved to Al-Arbyia. I am not writing Attwar’s autobiography here but this has connection to the events, Attwar (I think you are smart enough to know that she is a Sunni) was well-known of her support for the Iraqi cause and blaming the occupation for the mess in Iraq. One ex-Abu Ghraib prisoner tells this story about Attwar:

When I came out through the gates of Abu-Ghraib there was TV team waiting outside asked me for an interview, I said yes, then came TV anchor Attwar and asked “How do you fell no…. “she couldn’t finish her question because she burst in tears when she saw how do I look like, bare feet, torn clothes….

This is an example of Attwar mentality.

{Civil war, is it close, and is it really a disaster? via Ali blogs again}

{The Destruction of the Samarra Shrine}

{In favor of Islamic Apocalypse}

{Just some other stuff I was thinking about}

{Did I Say Restraint? Oy}